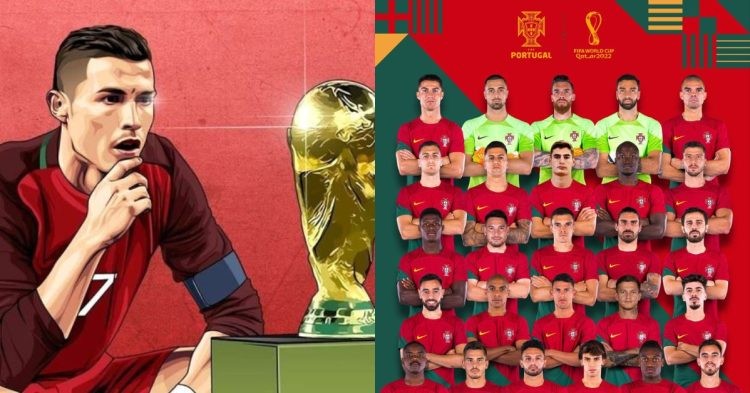 Cristiano Ronaldo has been at the top of world football for more than a decade. While his current form at the club and international level may not be what it once was, he will be more than ready for this World Cup. Ronaldo, now 37, will be 41 by the time the next World Cup comes around. He may not have announced it, but this World Cup will in all likelihood be his last.

Portugal has announced a strong squad for this World Cup. The team has been impressive since their 2016 Euros triumph. Despite this, they have been disappointing in the World Cup. With Ronaldo, Portugal’s best finish has been only fourth place in 2006. In 2018, the team was knocked out in the Round of 16 by Uruguay.

Portugal’s manager Fernando Santos has revealed his 26-man squad for the Qatar World Cup. Ronaldo has sent out a powerful message to the 10 million Portuguese fans at home. The Manchester United star has called on for their support in Qatar. Ronaldo and Pepe are the most experienced in a hugely talented squad selected by Santos.

Cristiano Ronaldo has taken care of his fitness better than almost all sportsmen. He may follow in Gianluigi Buffon’s footsteps and continue his career past the age of 40. But the careers of goalkeepers and outfield players are very different. A goalkeeper is said to reach his best years at the age of 30, while outfield players are said to decline.

While Ronaldo has made all suggestions of his career declining past 30 looks silly, many believe he will not be able to play until the next World Cup when he will be 41. Ronaldo also seems very focused on this World Cup and has taken to social media to announce this.

He has sent a loud message to the Portuguese fans. Ronaldo has said Santos has not only called the 26 men on the pitch but the 10 million Portuguese at home as well. We can infer that their support is as important to him as his teammates’ performances.

Portugal kicks off their World Cup against Ghana on the 24th of November, before facing Uruguay and South Korea on the 29th of November and 2nd of December respectively.