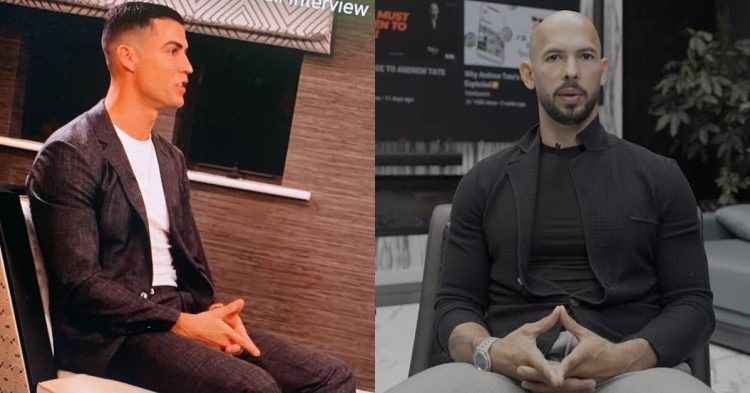 Cristiano Ronaldo and Andrew Tate are both very familiar names to people. However, the reasons might be completely different. Although they are two very different personalities, there are definitely some similarities between these two.

Andrew Tate is a former professional kickboxer. In 2009, he won the ISKA Full Contact Cruiserweight Championship in Derby. He also took the number one position in his division in Europe. However, the reason he is very well-known is quite different.

Since his retirement, he has started selling memberships for his course in the “Hustler’s University” and his misogynistic antics in the Big Brother house made him famous overnight. Since then his social media accounts have been banned multiple times and he was arrested with his brother as well, very recently.

Cristiano Ronaldo, on the other hand, is one of the most influential personalities in the world. However, he has been at the center of controversy not so long ago. During his second spell at Manchester United, after a few unsettling mishaps with Erik ten Hag, he did an explosive interview with Piers Morgan criticizing the club’s higher-ups and manager harshly. His contract was terminated as a result of the turmoil.

No way Ronaldo and Andrew Tate got the same Hand Posture 😭😭 pic.twitter.com/PJev4j7ZuR

In the interview with Piers Morgan there was one more controversial moment beside his bashing Manchester United. The 37-year-old was seen doing a particular hand sign which is identical to Andrew Tate’s. Andrew Tate’s antics are mostly considered a pill hard to swallow, thanks to his controversial personality. That’s why; a world-renowned athlete like Ronaldo copying Tate’s hand sign has been upsetting for the fans.

However, Tate was asked in an interview about his hand sign. He said, “This hand symbol is my father’s hand symbol. He played chess, he used to think like this (making the hand gesture),” explains the source of it. Tate added, “So I adopted this, and continued doing it. It doesn’t mean anything,” explaining why he does this hand-sign.

What did Andrew Tate say about Cristiano Ronaldo?

Andrew Tate and soccer doesn’t really have a love affair. He has said before that he does not watch soccer and has no idea about who Cristiano Ronaldo or Lionel Messi is. Tate even said he hates England’s soccer team and watches their matches to see them lose.

Andrew Tate However, in a recent interview with Piers Morgan finally stopped lying about not knowing Messi and Ronaldo. Piers and Tate had a game of chess and after that when Piers asked him about the iconic duo, he said, “They (Messi and Ronaldo) are two hard-working men on the earth and I respect people who dedicate themselves,” recognizing the two greats of the game.

As far as Cristiano Ronaldo copying Andrew Tate goes, it looks like there is no connection between their hand signs. It is something a lot of people do on a regular basis when thinking. It is also a popular Yoga move. Soccer fans reacted to this mostly in a funny and sarcastic way.