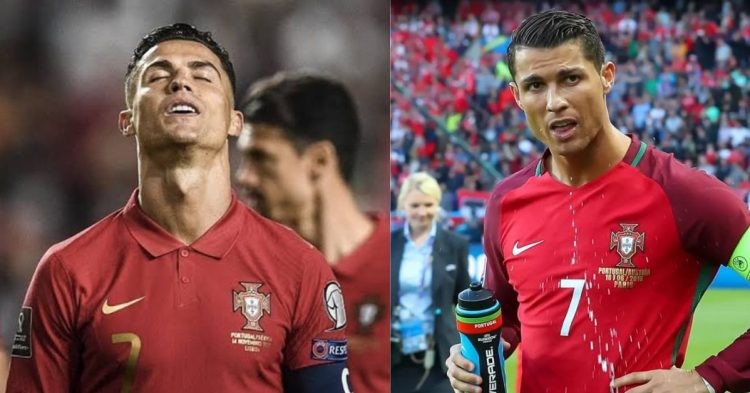 Cristiano Ronaldo got drunk only one time (Credit: Getty Images)

Cristiano Ronaldo is one of those rare soccer players who do not drink at all. The Portuguese superstar is the biggest example of an exemplary professional, who lets nothing get in way of his fitness. Once, however, the most disciplined man, in the sport broke his own rule.

The story goes back to Euro 2016 tournament. Cristiano Ronaldo had the best moment of his international career, when he won the tournament with Portugal, despite being heavy underdogs. Cristiano Ronaldo performed extremely well throughout the group-stage matches and popped up with important goals. He continued his performances in the knockout stages too.

Portugal showed ultimate grit to prove everything wrong and play the final against the tournament favorites France. Very unfortunately Ronaldo was taken off in the 25th minute with a Dimitri Payet-inflicted knee injury. The Portugal team looked even more determined to win it for their captain. And finally, Eder’s 109th-minute strike did the magic.

Ronaldo again broke down in tears, but this time in sheer joy. The Euro was the biggest moment in Portuguese soccer history and the players celebrated extensively to enjoy it. The celebrations were so intense that they left the star man dehydrated and he got drunk.

According to GOAL, Ronaldo himself talked about it in an interview with Diletta Leotta in 2019. He said, “It was an incredible, unforgettable evening. I cried, I laughed, I suffered, I shouted, I got drunk.” Ronaldo added to that, “I never drink but that day was so special. The most important trophy ever,” explaining that it was the intensity and carefree nature of the moment.

Drinking is not foreign to professional athletes. We have even seen Lionel Messi get so drunk after his World Cup win last year in Buenos Aires that he couldn’t even drive. But why Cristiano Ronaldo is completely against drinking? There is more than one reason behind this question.

Firstly, the biggest reason behind his no to alcohol is the death of his father, Dinis Aveiro. The star man has always talked about his regrets of not being able to show his father, what a great player he became. Dinis Aveiro, a former soldier never had a very good relationship with a young Cristiano. He passed away at 52, in 2005 due to heavy alcohol consumption. At that time Cristiano was only 20 years old.

Secondly, the ex-Real Madrid man refuses to drink or smoke because he donates blood. He has been asked several times, why he doesn’t drink or why he does not have a tattoo. Cristiano has always talked about him donating blood whenever eligible. And having tattoos or consuming alcohol disrupts those.

The third and final reason behind this is his heart problems at a young age. Cristiano Ronaldo was diagnosed with a heart problem at 15 only. He had to get operated on in order to get cured of the situation. So he has completely removed alcohol from his lifestyle alongside other carbonated drinks. Conclusively, the 37-year-old health-conscious super athlete avoids all bad habits to stay in top shape.