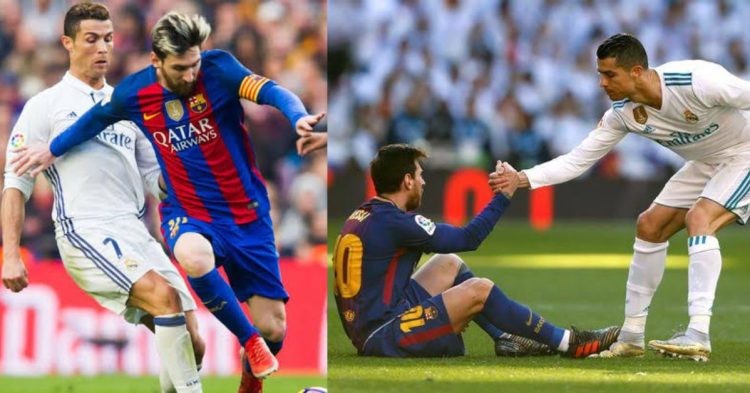 Cristiano Ronaldo and Lionel Messi met each other most number of times in El Clasicos (Credit: Twitter)

We, soccer fans, have seen many rivalries throughout the years. Some rivalries are between certain clubs and some rivalries are between players. We are lucky enough to witness a rivalry that is comfortably head and shoulders above anyone we have seen or we might see in the future. Cristiano Ronaldo and Lionel Messi, are two of the greatest ever to play the game. But who has done better when they faced each other?

Right now these two are at the twilight end of their career. The Portuguese will turn 38 in a couple of months and the little magician will turn 36 in a few months. Both of them have won every possible trophy in their club careers, including 12 Ballon d’Or trophies between them. Only the World Cup trophy was missing from their trophy cabinets, which the Argentine won in December 2022.

Cristiano Ronaldo’s decision to join Al-Nassr made it look like the end of their rivalry, as there was no chance they will play against each other ever again. However, they will be facing each other as soon as January 19th in a friendly match in Saudi Arabia. If that’s not enough, there’s a massive buzz about Al-Nassr’s biggest rival Al-Hilal might better Ronaldo’s $214 million a year deal by offering Leo Messi a $300 million per year deal.

Cristiano Ronaldo and Lionel Messi’s rivalry lit up when 24-year-old Ronaldo moved to Real Madrid. A 22-year-old Messi was ripping the Spanish League apart for Barcelona. Cristiano Ronaldo went on to spend his next nine years in the Spanish capital and shared the most insane rivalry the sport has ever seen.

El Clasico is comfortably the biggest soccer match on the planet and Ronaldo and Messi facing each other added another layer of greatness to that. They have so far met 34 times each other playing for club and country. The Argentinean has a clear edge over his arch-rival, winning on 15 occasions, drawing 9 times, and, losing 9. So, Cristiano has 10 wins, 9 draws, and 15 losses.

In these 34 matches, they are almost identical in their goalscoring stints. Lionel Messi has netted 21 times and Cristiano Ronaldo has scored 20 times. In terms of assists though, Lionel Messi is sitting with 11 assists, and Ronaldo with just one assist.