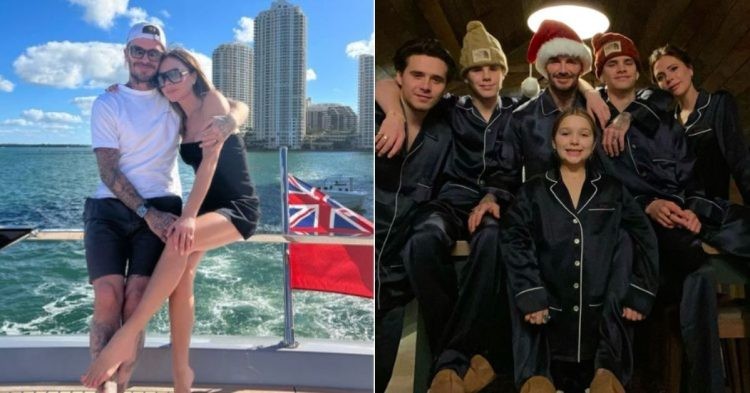 David Beckham was one of the best players of his generation. He came through the scenes at Old Trafford and was one of the players to be a part of the Class of 92’ at Manchester United. Apart from a legendary career, Beckham has had a great life off the soccer field too.

Victoria and David met in 1997 when the former attended a soccer match. At the time, Victoria was one of the most famous celebrities in the UK. She was part of the renowned music group, Spice Girls. She was known as Pop Spice in the group. It all started right there for the pair, as they kicked it off just a few days later at another soccer match.

The entire country knew that they were dating, especially after how paparazzi followed every single move they made. A year or so later, the couple announced that they were engaged, in January 1998. Later that year, the world heard the news of the birth of David and Victoria’s first child, Brooklyn. That was the start of the beautiful family they built together.

How many kids do David and Victoria Beckham have?

David and Victoria have welcomed four children together and it looks like they have followed in their parents’ footsteps as well. The children have chosen unique and specific career paths and seem to be clear about what they want to pursue as a career.

Brooklyn, their first child, was born on March 4, 1999, in London. He pursued a career in modeling early on in his life. In 2014, Brooklyn was featured in the Man About Town and kickstarted his career in front of the cameras. Together with that, he even had a brief career in soccer! In 2015, Arsenal released Brooklyn when he was just 16 years old. He had been with the youth academy for a couple of years and looked to have a bright career in the sport.

However, it came crashing down when the Arsenal youth academy coaches decided to release him in light of other talents at the time. Some sources say that Brooklyn was also a midfielder, just like his dad. Speaking of David, the father-son duo even played for the same side once, in a charity soccer match. They played together when the Great Britain & Ireland XI played against the Rest of The World in a UNICEF charity match.

Brooklyn came on as a substitute for his dad initially, but David joined back when Arsenal legend Sol Campbell suffered an injury. The Beckhams helped their side win the game 3-1 on the night at Old Trafford, under David’s legendary former manager Sir Alex Ferguson.

Brooklyn is now a professional chef and is currently married to actress Nicola Peltz. Her breakout role was when she appeared in the Transformers movie; Age Of Extinction as ‘Tessa Yeager.’ The couple tied the knot in April 2022 and often share images on their Instagram.

Romeo Beckham is David and Victoria’s second child. The couple welcomed him on September 1, 2002, and he was born in Westminster, London as well. Just like his older brother, Romeo was also part of Arsenal’s youth academy. He was released by the club in the same year. After moving over to the tennis court for a while, Romeo returned to pursuing a career in soccer a few years later.

When his dad implemented the idea of Inter Miami (formerly known as Fort Lauderdale FC), Romeo signed with the club right at the start. He made his senior debut at the age of 19 against Tormenta FC.

Recently, in January 2023, Romeo signed with Brentford B, on loan from Inter Miami which will last until the end of the season. In 26 outings for his father’s club, Romeo has scored 2 goals as a forward.

Cruz is the couple’s third child, and their last son as well. He was born on February 20, 2005. Unlike his brothers, Cruz was born in Madrid, Spain. This was when David played for Real Madrid and before he left for LA Galaxy in the MLS.

Just like his brothers, Cruz was also part of the Arsenal youth academy for a while before the club released him. Right now, he is trying to make it in the music industry as a singer, after announcing it in 2022. Many sources claim that Cruz has been working with the songwriter who launched the world-famous Justin Bieber into popularity.

Harper, born on July 10, 2011, is the youngest child and the only daughter in the Beckham family. She was born in Los Angeles, United States when David was close to the end of his career at LA Galaxy. Unlike the rest of the family, Harper’s details have been mostly kept under wraps. The world is not aware of where she goes to school or what her hobbies are.

David and Victoria have named her ‘Harper Seven Beckham’ which would be a unique one if we’re being honest. The real reason for the ‘Seven’ has not been revealed but fans have speculated that it could be because of David’s love for the number 7 and how it was his jersey number when he was a soccer player.

The pair have been one of the most famous couples in the world, and their family as well. Together with that, the Beckham family seems to be a family of models as well. With the help of their many ventures, David and Victoria have accumulated a vast amount of wealth, which accumulates to around $450 million in net worth.

Their lifestyle has been out there for the world to see, as they often share images on social media. David has taken a huge step as a soccer club owner with Inter Miami and Victoria runs her own clothing line as well. We can only expect that number to rise in the future.