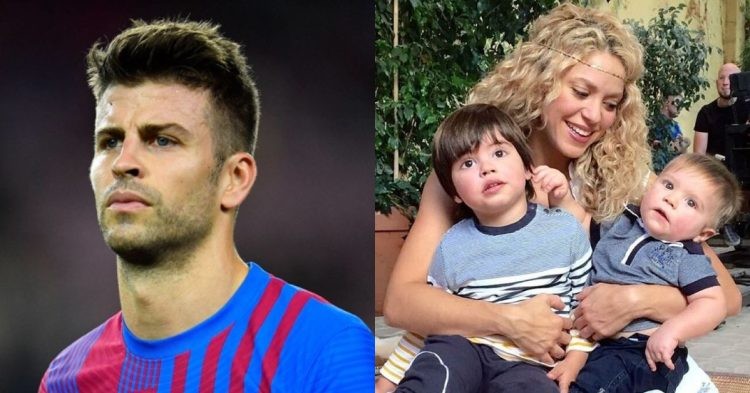 Gerard Pique, Shakira and their children (Credits: The Japan Times and Pinterest)

Gerard Pique and Shakira announced their separation earlier this year. Shakira’s latest song, ‘Monotonía’ is said to be about her split with long-time boyfriend Pique. There has been a lot of speculation surrounding the reason for their split. Many believe it was Pique who cheated on Shakira with 23-year-old Clara Chia Marti, who worked at his production company, Kosmos.

In a new report from MARCA, Pique reportedly visited his old house with Shakira, following the release of her latest song.

Why did Gerard Pique go back to his house with Shakira?

Gerard Pique and Shakira have two children. Nine-year-old Milan, and seven-year-old Sasha whose custody is currently being shared by the couple. Pique’s reason for the visit was apparently to pick up his children. The Barcelona defender avoided the press by using his parent’s house to enter his old house with Shakira.

The defender was reportedly at the house for not more than 10 minutes during which he picked his children up and avoided the press. Pique refused to give any statement to the media that was surrounding Shakira’s house at the time. This was the first time Pique visited his old house since the couple split earlier this year.

What is Pique’s lawsuit against Shakira?

In June 2022, one of the biggest couples in the footballing world, Gerard Pique and Shakira, announced their separation. People dove deep into the separation. Spanish paparazzi giant, Jordi Martin revealed that the matters of divorce could be taken to court.

Pique reportedly was caught cheating on Shakira, with a 23-year-old PR student, Clara Chia Marti who reportedly worked at his production company Kosmos. The two have since been spotted together at a wedding which shows the two are not afraid to be seen together publicly. There have also been rumblings of a reported relationship between Shakira and tennis superstar Rafael Nadal.

The court case seems to be mainly for custody over the couple’s two children, seven-year-old Sasha, and nine-year-old Milan. Shakira is also in the midst of a $15.5 million tax fraud in Spain. She wants to take her children to Miami, USA while Pique is opposed to moving their children from Barcelona.

Jordi Martin added that this tax fraud case, her children’s well-being, and the undue attention the media will give the case, as seen with the Johnny Depp and Amber Heard fiasco, would be the main reasons for her wanting to settle this matter privately.