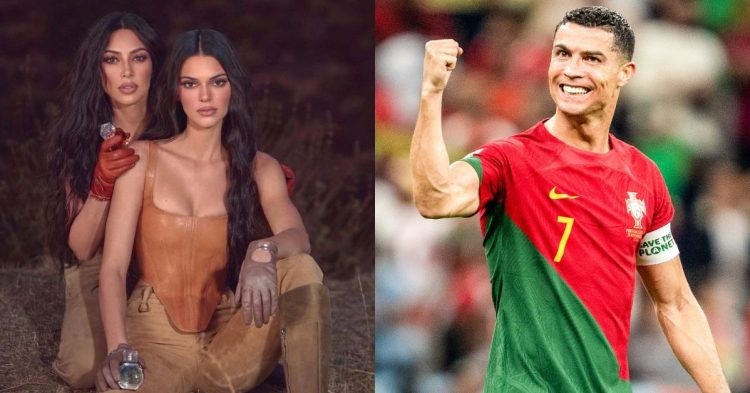 Cristiano Ronaldo has firmly cemented his place in the hearts of soccer fans as one of the greatest to ever kick a ball. The five-time Ballon d’Or-winner, during his illustrious career, has been involved with many notable women.

While currently he is dating model Georgina Rodriguez, he seemed to cause a stir back in his bachelor days.

Ronaldo is rumored to have dated both, Kim Kardashian and Kendall Jenner before meeting Georgina Rodriguez.

Featuring on Ryan Seacrest‘s Youtube Video, Kim Kardashian, star of the American TV show “Keeping up with the Kardashians“, was asked a controversial question.

She was asked whether she dated soccer superstar Cristiano Ronaldo back when he played for Real Madrid. While her instant reply was “No”, she couldn’t help but hide her blushing face. She claimed that she was “just friends” with Cristiano Ronaldo and requested to move on to the next question.

“Paris Hilton and Kim Kardashian were two of the most popular women in America. Even though we were players at Real Madrid, it was hard to get there. But for Cristiano Ronaldo it was a piece of cake. He had his appearance and prestige in America.” pic.twitter.com/mTlh7wBVM1

Contrary to what she claimed in the interview, however, certain reports suggest otherwise. One report claims an eyewitness account of the pair kissing in Spain after a game.

Ronaldo and Kim Kardashian reportedly had a brief fling in 2010. According to reports, the Real Madrid was caught kissing the ‘Keeping Up With The Kardashians’ star during her low-key trip ! pic.twitter.com/e9JIviuzUt

Another, more interesting and much more detailed report, claims a lot more. The report alleges Kardashian’s visit to Ronaldo’s residence in Spain when he played for Real Madrid. The same report also claims that Kim was spotted entering Ronaldo’s house where she stayed for around four hours after which she took a ride to the airport.

Did Ronaldo hook up with Kendall Jenner?

Ronaldo was single for a brief period in between relationships, in 2016. This was after his breakup with Irina Shayk, the Russian Supermodel, and before his chance encounter with his current love interest, Georgina Rodriguez.

It was in this window that Ronaldo and Jenner were rumored to be together for a while.

The audacity of Kendall pic.twitter.com/fUuy77POXI

A few weeks later, the pair seem to have been together in Brazil, albeit for different purposes. However, fans seem to concoct a theory that suggests that their business, which led to their itineraries overlapping, might actually have been for a sneak getaway.

at least once a day i wonder whether ronaldo and kendall jenner have hooked up – simply because i watched a tiktok like 3 months ago about her looking at him in public?

Many on the internet hoped for them to get together. However, neither has confirmed any romantic relationship between them.

Shortly thereafter, in the same year, both had committed themselves elsewhere. Ronaldo now has a 7-year relationship with Georgina Rodriguez which is going strong. Kendall, on the other hand, has dated several men since then. She has been involved with Harry Styles, Nick Jonas, Jordan Clarkson, Blake Griffin, and Devin Booker among others.