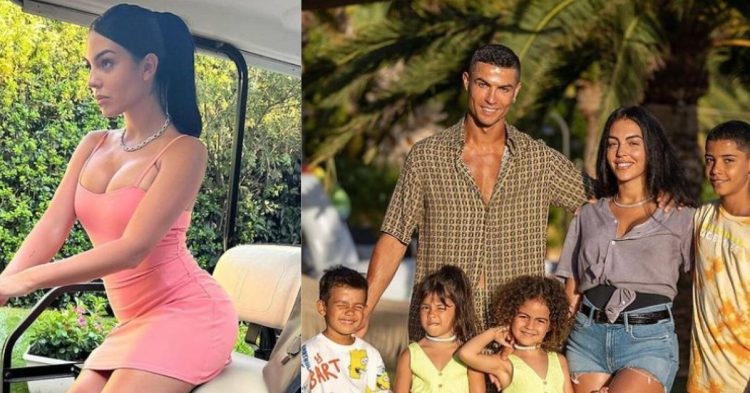 Cristiano Ronaldo and Georgina Rodriguez with their family (Source: Twitter)

Georgina serves as a mother to Ronaldo’s five children. Cristiano Jr is Ronaldo’s eldest son who was born in 2010. Cristiano Jr’s mother’s name is not known to the public as per an agreement Ronaldo signed with her. However, Ronaldo has full custody over Cristiano Jr.

Ronaldo again became a father in June 2017 when he had a pair of twins born via surrogacy. The Portuguese skipper had his first child with Georgina in November 2017 when she gave birth to their daughter. Ronaldo announced that they were expecting another set of twins. Unfortunately, the male twin died during childbirth, while the female twin survived.

Georgina Rodriguez was born to a humble family in Buenos Aires, Argentina. However, she moved to Jaca, Spain, where she grew up.

Georgina’s mother tongue is Spanish. However, she is also fluent in English, a skill she learned during her earlier days when she came to Bristol, England to sharpen up her linguistic skills. Georgina can also speak Portuguese, which has been spotted during her various interviews.

How did Ronaldo meet Georgina?

Cristiano Ronaldo and Georgina Rodriguez’s love story started back in 2016. Cristiano Ronaldo was playing for Real Madrid during that time, while Georgina worked as an assistant in a Gucci store in Madrid. Their relationship developed as they began meeting each other during various events.

Once the Gucci store became aware of Ronaldo and Georgina’s secret courtship, the store promptly fired Georgina in the fear of attracting fans who would invade the store. However, later, the former Manchester United star used his connections to find Georgina a job at a Prada store in Spain.

Albeit the couple never officially disclosed their relationship, it became public when the couple was spotted at Disneyland in 2016, despite Ronaldo’s best efforts to disguise himself. The relationship became fully official once Ronaldo and Georgina started posting pictures with each other on their respective Instagram accounts.