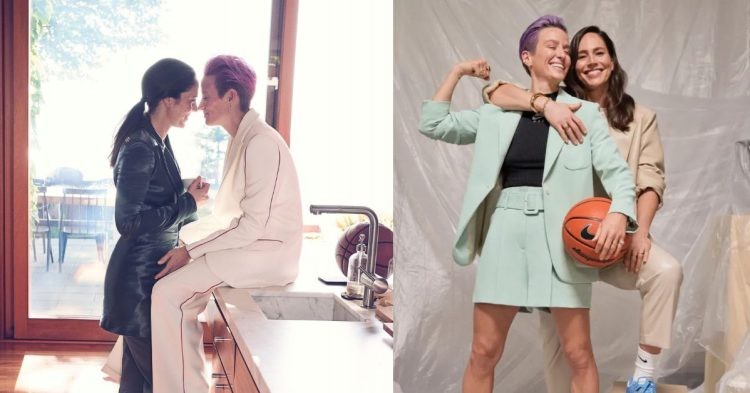 Megan Rapinoe and Sue Bird are one of the most popular couples in the USA sports scene. They have been together for a while now, and it is quite interesting to find out how their journey has been. For those who don’t know, both Rapinoe and Bird represent the USA.

Megan is one of the most successful women’s soccer players in the history of the game. She has two FIFA Women’s World Cups to her name (2015 & 2019). The American has scored 62 goals for her country during her illustrious career so far. She also plays for the OL Reign currently. On the other hand, her partner Sue Bird is a WNBA player who retired earlier this year. With the Seattle Storms, Bird won 4 WNBA titles.

The story might seem unusual to many. This is mainly because both of them are experts in completely different fields. But how did they end up together?

How did Megan Rapinoe and Sue Bird meet?

It all started when the two US sporting icons met at a photo shoot at the 2016 Olympics held in Rio, Brazil. However, as if things were meant to be, they met again soon after the USA women’s basketball team managed to win the gold medal. The party they held included the one and only Megan in attendance. It looks like that was the start of something special for the pair.

Although both of them felt the spark, Megan thought deep down, “‘Okay, don’t be a cliché lesbian, where you love this person when you first meet them. But it was just immediately like, ‘Oh, this is home,'” she told Out. It seems like Megan did not expect how she was going to feel about her future life partner. She didn’t want it to be another case of the same old story, but when it was, Megan could not help but feel happy.

Since 2016, the couple has been together and has stuck by one another through everything. However, the biggest highlight of their love life would be their engagement in 2020. Sue announced it to the entire world with an image of Rapinoe down on one knee and putting a ring on her finger. The fact that the image did not have a caption shows that Bird wanted the moment to speak for itself.

They haven’t tied the knot but earlier this year, Bird told Seattle Times that her schedule isn’t what’s delaying the wedding. However, it’s Megan’s career with the USWNT and the 2023 FIFA Women’s World Cup. Bird mentioned that the wedding will most likely take place after that.