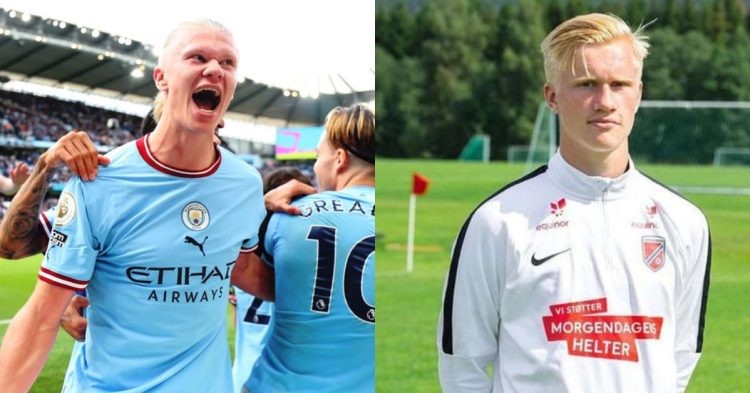 Erling Haaland has started tearing apart the premier league and it is in doubt that his cousin is going to follow his footsteps. It is believed that Albert Braut Tjaaland, who is 18, can be the next Haaland to top scoresheets. The current Manchester City star has scored 15 goals in 9 appearances in the premier league and 28 goals in 22 appearances in the champions league.

They even has the same running style 😭

The next Norwegian striker, Albert Tjåland, plays for the Molde FK U19 team. A video of Albert scoring a beautiful half-volley has gone viral and he is surely the fan’s favourite at 18 years of age. According to some reports, he has scored 64 goals in 37 games.

Haaland’s cousin, Albert Tjåland, is already a fan’s favourite after scoring a beautiful goal. A striker for a Norwegian second-tier team, Albert Braut Tjaaland, 18, is a professional football player from Norway. His relationship with Norway international and Manchester City striker Erling Haaland is what makes him most well-known.

It is believed that after his move to Molde in the summer of 2020, he gained attention after recording a further 64 goals in his first 37 games for the youth teams. Molde, a previous team of Haaland’s, eventually bought Tjaaland. He made his club debut against Spjelkavik IL in the Norwegian Cup. Ten minutes after coming on as a replacement, he scored the team’s first goal.

According to some reports, it was revealed in an interview that Albert wanted to earn a living from soccer in the long run, “It’s cool what he does, but I hear about it (the comparisons) often, and it can be nice to let it go from time to time. In the short term, I want to get into the age-specific national team. In the long run, I hope to be able to make a living from playing football.”

Fans have shown their attention to the young potential as they comment; “He has a great future ahead of him if he does the everyday things 100 percent and properly.” In another video, it can be seen that Albert scores a goal from the halfway line and celebrates with his teammates. Fans think that Haaland’s family is crazy for producing critical strikers.