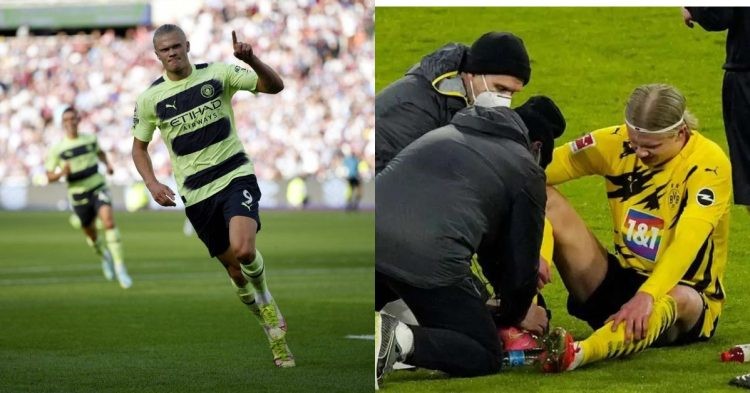 Erling Haaland has had the best possible start to life in the Premier League. He has scored 15 goals and assisted 3 in 10 matches in the Premier League so far. The Norwegian striker also has a prolific record in the Champions League. Manchester City truly has a huge talent at its disposal.

Another promising development in Haaland’s start at City is the fact that he is yet to pick up any injuries. He has dealt with his share of injuries at Borussia Dortmund. Pep Guardiola remarked that his recovery rate after a game is amazing because he is still just 22 years old.

What injuries has Erling Haaland faced?

According to Transfermarkt, Haaland has faced quite a few injuries. At Molde, he suffered just one injury, a ligament tear, before he moved to RB Salzburg.

While in Austria, Haaland faced the injuries of a typical striker. He faced knee problems, abdominal muscle injuries, and bruises. All injuries faced by the Norwegian at Salzburg were minor and caused him to miss a maximum of one game.

After his move to Dortmund, Haaland faced his first major injury. A torn muscle fiber meant he missed 7 games for Dortmund. His second major injury was a muscular problem with the hip flexor muscle, again causing him to miss 7 games. He missed another 6 games following this, with more muscular problems. All in all, he has had 3 major injuries at Dortmund, meaning he has missed 20 games through major injuries.

These injuries, although, can be attributed to over-exertion. He played the majority of games at Dortmund without rotation. Guardiola is one of the best managers in the world and is known for his regular rotation of players. He will also be taking special care of his star player, to prevent any injury possible.

How long was Haaland injured?

Haaland has missed 28 games for Dortmund in his 2-and-a-half seasons at the club. He missed 5 games for Salzburg and 3 for Molde. He is yet to miss a game for City through injury. Haaland is not an injury-prone player when compared to players who have played in his position. Despite this, due to his large build, he is not immune to some muscular problems from time to time. But with a coach like Pep Guardiola and world-class facilities at City, the risk of injuries for Haaland will have reduced significantly.