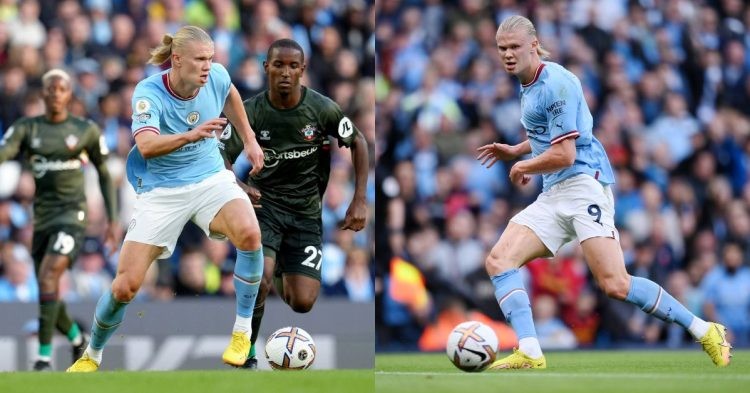 The soccer world is currently witnessing brilliance every time Erling Haaland steps onto the pitch. The Manchester City superstar has taken the English Premier League by storm since joining this summer. So far, Haaland has scored 17 goals in the EPL in just 11 appearances for the club.

The Norwegian striker is a man of many talents, and he never backs down from an opportunity to let the world know what he is up to. However, he does try to keep his religion and faith private and away from the public eye.

Erling Haaland was raised as a Christian by his family

Haaland was born in Leeds, United Kingdom. This was when his father, Alfie Haaland, was a PL soccer player for Leeds United. However, the Haaland family moved to Norway when Erling was just 3 years old. Despite being a Christian by birth, many believe the player to be Muslim. The reason for that would mainly be because of what he did.

In September 2021, Haaland celebrated a goal with his then-teammate, Mahmoud Dahoud. The official Borussia Dortmund Twitter account posted an image of that with the caption, “Alhamdulillah Habibi.” What caught the attention of many was Erling’s reply. He tweeted, “Alhamdulillah.”

Many initially thought Haaland was paying respect to the religion and faith his friend and teammate followed. However, that was not the only time his tweets prompted fans to believe that he was Muslim.

Earlier this year, Haaland joined Manchester City. He had to wait a few weeks before making his debut for the club since he joined at the start of the transfer window. When a Man City-based Twitter account wished him on his birthday on 21st July, he replied, “Thanks! Debut vs Bayern Inshallah.”

Thanks! Debut vs Bayern Inshallah 🙌🏻 https://t.co/iH6SoWljqJ

Now, many would have thought that he was simply just paying tribute to his friend the first time he tweeted “Alhamdulillah”. But the second time, when he mentioned “Inshallah”, which means “God willing,” it surprised fans as no one expected Haaland to be a follower of Islam.

However, the tweets made by Erling can still mean that he is just an admirer of the religion and not a believer. In addition to that, he has not publicly revealed his religion and faith in the past.