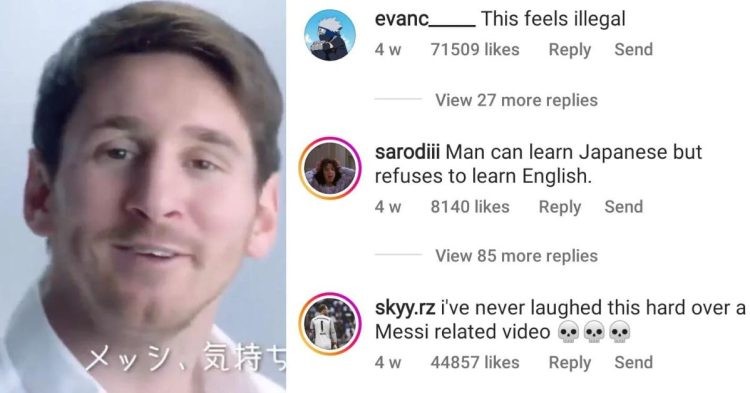 Lionel Messi made every football fan chuckle as a video of him talking in Japanese in a TV commercial in 2013 went viral on social media. Messi became the face of a marketing campaign for what seems to be Angfa Scalp-D, who market themselves as one of Japan’s most famous hair growth brands that wanted Messi for a facewash commercial campaign, as confirmed by ESPN in January of that year.

The fans couldn’t keep their laughter in as the Footballer spoke in Japanese, a fan on Twitter said “Messi speaks more Japanese than English” while another one wrote “This video made my day” and some fans even compared his advert to Cristiano Ronaldo’s Shope advertisements.

With a following of 366 million on Instagram alone, the seven-time Ballon d’Or winner’s marketing empire has grown with his career. Most recently announcing his commercial partnership with BYJU’S an E-Learning platform as its Brand Ambassador. Messi has made some unexpected but great marketing gigs over the years.

From partnering up with Adidas to starring in Pepsi ads Messi has done marketing campaigns not only for beverages and shoes but for airlines, crypto-currency, and many more. Some of his biggest deals are:

Messi signed with Adidas back in 2006 and is the face of the brand now. With his deal set to expire in 2017.  Adidas offered Messi a lifelong contract while also promising to release a line of Messi’s shoes. This deal saw Messi earn $25 million annually and he signed it back in 2017.

Messi has been the face of Pepsi since the start of his career in 2013. He’s stared alongside fellow footballers like Mo Salah and Jadon Sancho.

When Pepsi Co’s chip brand Lay’s launched a Major Global Integrated Marketing campaign back in 2014, they went for Messi as the soccer star was already promoting Pepsi Co’s beverage.

Since then, Lay’s has done multiple campaigns in different continents of the world with the footballer and also tweeted a new flavor ‘G.O.A.T’s cheese,’ with Messi’s face photoshopped on the bag.

So our flavor chefs in France have an idea… #lays #messi #GOAT pic.twitter.com/7NYqtZJ0EM

An International Telecommunications company based in Qatar, Messi has been the face of Ooredoo since 2013 and has helped the company grow across multiple platforms due to his fan following.

Messi signed with Gatorade during the drink company’s ‘Everything Changes’ campaign alongside then-teammate Luis Suarez.

Lionel Messi scored his 644th goal for Barcelona in a 3-0 win over Real Valladolid surpassing Pele’s record for Brazilian side Santos. To commemorate such a feat, Budweiser partnered with Leo Messi.

Budweiser, a beer maker, sent a bottle to every goalkeeper the Argentine had scored against on his journey to break Pele’s Record.

The digital era has surely made its mark on the world as Messi decided to announce multiple digital projects that he has tied up with.

Messi signed with Socios, a cryptocurrency-based fan engagement platform, powered by Gzira, Malta-based blockchain Fintech provider in March of 2022. Kicking off with the ‘Be More’ campaign, this collaboration entails both educational and promotional purposes.

Messi has also partnered up with games like Call of Duty and PUBG Mobile in recent months.

What languages can Lionel Messi speak?

Upon the release of this video, fans must be curious as to how many languages the 7-time Ballon d’Or winner speaks.

As per sources, Messi can only speak Spanish and Catalan. Spanish was his mother tongue since nearly the whole of South America speaks the language. After he moved to Spain to play for FC Barcelona, he brushed up on his Catalan.

Citing this as the reason, Messi never learned English, he tried to speak in English in his Ballon d’Or interviews but the magician dubbed footballer was at a loss for words as he looked uncomfortable in conversing in this language.