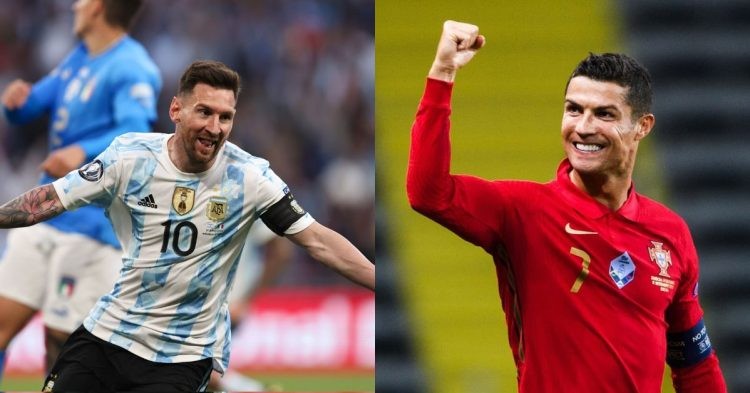 The FIFA World Cup 2022 is just around the corner and all of the world’s biggest soccer stars are gearing up for the biggest tournament in the world. The World Cup begins on 20th November in Qatar. The entire world awaits as we get closer to the most-watched tournament on the planet.

The groups were announced earlier this year in April and it seems like the World Cup would not disappoint fans this year as well. There are some exciting fixtures for fans to look forward to. However, there are two players that all the fans of the beautiful game have their eyes on. It is none other than Cristiano Ronaldo and Lionel Messi.

During the last World Cup, Portugal faced Spain in their first group-stage game. Despite numerous defensive troubles, they clawed back to a 3-3 draw, thanks to a sensational freekick from the great Ronaldo himself. In the next game, the star forward scored again, a bullet header against Morocco. Despite starting in stellar form, the then-Real Madrid star missed a penalty against Iran in the last group-stage game that ended in a 1-1 draw.

Cristiano Ronaldo scores this beautiful free kick to complete his hat trick against Spain in the World Cup in 2018. What A Moment pic.twitter.com/Rfr2MY0npE

After finishing second in the group, Portugal faced Uruguay. On paper, Portugal was the better team, simply because they had the stars who were in form at the time. However, it was a whole other story on the pitch. Edinson Cavani haunted Portugal fans with a brace despite a 55th-minute equalizer from Pepe. That was the end of the FIFA World Cup 2018 for Cristiano’s team.

Ronaldo and Co. have endured some tough results lately. Last month, the European country lost to Spain in the UEFA Nations League, due to an 88th-minute-winner from Ronaldo’s former teammate Alvaro Morata. They finished 1st in the group above Portugal and are one of the final four teams. The other countries to make it to the late stages are Croatia, Italy, and the Netherlands.

PORTUGAL FAIL TO QUALIFY FOR THE FINAL 4 OF THE NATIONS LEAGUE! 🇵🇹❌ pic.twitter.com/G5VwahxIgd

After the 24th of November, Portugal will face Uruguay on November 29th. After that, they will be playing against South Korea on 2nd December. It will be an eventful World Cup for Ronaldo and Portugal fans. Ronaldo might walk his national teammates for more games but that will be if Portugal makes it out of the group stages, which is expected of them by many soccer fans.

When are Lionel Messi and Argentina’s first game?

Lionel Messi and Argentina are in Group C of the FIFA World Cup 2022. They will face the likes of Saudi Arabia, Mexico, and Poland. Argentina’s first game will be on 22nd November, against Saudi Arabia. After that, they will face Mexico on 27th November, before playing against Robert Lewandowski’s Poland on the 1st of December.

Messi has now won two international trophies with the South American country. He won the 2021 Copa America after helping Argentina defeat arch-rivals Brazil in the finals. Angel Di Maria scored the winner in the 22nd minute after Rodrigo De Paul played the pass to him.

3⃣5⃣ games unbeaten for Argentina after a 3-0 win over Jamaica.

Messi’s Argentina is currently nearing a legendary record in international football. They have gone 35 games unbeaten across all international competitions, since 2019. Italy currently holds the record for the longest unbeaten streak with 37 games.

Going into the World Cup, Argentina is in exceptional form. However, they do have injury worries for their key players: Messi, Di Maria, and Dybala. The country’s captain also issued a statement recently, regarding his injury. In addition to that, Messi also announced that this World Cup will also be his last.

Messi will surely be looking to help his country get past the group stages and feature in more matches of the World Cup. With that said, the PSG star will be looking to end his World Cup career on a high note, possibly winning the tournament in Qatar in December.