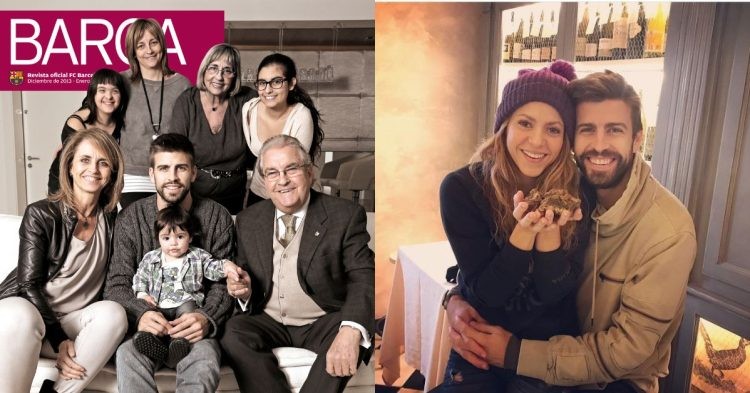 Gerard Pique with his family for a interview with Barcelona (left) and with Shakira (right) (Credits: Barcelona, Google)

It’s been five months since Gerard Pique and Shakira’s breakup made headlines, and it’s still making headlines. Weeks ago, the couple and their respective legal teams had a grueling 12-hour custody agreement discussion for their children. Since then, a lot of fabricated information about these discussions has spread online.

According to some media reports, after 12 hours of negotiating, the former Barcelona captain sobbed in the kitchen of the erstwhile family’s home. He was consoled by the Colombian, who, according to reports, was saddened to see him in such a state.

SHAKIRA AND GERARD PIQUE FINALIZES CHILD CUSTODY AGREEMENT
After a marathon twelve-hour meeting with their lawyers, singer Shakira and her ex-husband, footballer Gerard Pique have finally signed a child custody agreement that will avoid them fighting in court.#ESplashONTVC pic.twitter.com/VhpFGyQj0b

El Mundo asserts that this statement is inaccurate, as he did not cry in Shakira’s kitchen nor even stop in that room. For their section La Otra Cronica, the Spanish newspaper consulted sources close to the families of the celebrities, who denied this information.

There was considerable tension between the footballer and the singer during the intense negotiations, such that, on several occasions, they were on the verge of ending the session, said the sources.

In the end, Gerard Pique conceded for the sake of his children and agreed to a few of Shakira’s terms.

He even acknowledged that it was better to let the children go to Miami with Shakira, but with some special conditions, beneficial for both the children and their parents.

According to this agreement, Milan and Sasha will soon join Shakira in Miami at the end of the Spanish schools’ Christmas holidays in January to start their new life on the American continent.

The retired Barcelona defender and Monotony singer said their farewells politely and respectfully. Pique was snapped leaving Shakira’s home while she stayed at home and continued with the legal proceedings.

There have been some comments on Spanish TV shows about Milan and Sasha going to Miami with Shakira right away, despite some TV shows stating otherwise, this is also untrue. Before they depart for Miami, they will be completing their school year in Barcelona.

On the other hand, Gerard Pique is not looking for an apartment in Miami to settle in the North American city. He can see his children for 10 days each month. The agreement that resulted from the complicated negotiation will be ratified next week in court, as they have not yet done so.