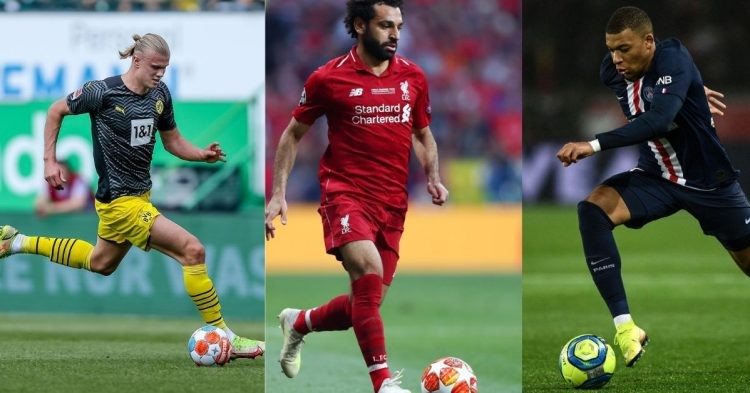 A key component of being a very good attacker in modern football is pace. Cristiano Ronaldo and Lionel Messi were the quickest players on their respective sides and used it to their advantage. Recently although their pace has reduced considerably, which is understandable as they are in their mid-30s.

Among the new generation of footballers, Erling Haaland, Mohamed Salah, and Kylian Mbappe are touted to be one of the fastest footballers in the world. The attackers have been instrumental to their respective clubs’ success over the past few years.

Erling Haaland has had a wonderful career so far. His elite finishing, movement, and sheer pace mean he can be used in any system of football. He can fit in very well in a counter-attacking Dortmund side, or a possession-keeping Manchester City team. Haaland’s top speed was a staggering 36 km/hr.

Kylian Mbappe’s start to the season at PSG has been overshadowed by Messi and Neymar returning to their best forms. The French striker has scored 16 goals already this season, which is a fabulous record. Mbappe has clocked 38 km/hr as his top speed in a Ligue 1 fixture for PSG.

Surprisingly, thirty-year-old Mohamed Salah has a top speed higher than 22-year-old Erling Haaland so far. The Egyptian clocked a top speed of 36.6 km/hr. He clocked the speed in a counterattack against Manchester United in the Premier League.

Who is the fastest soccer player in the world?

Based on the above stats, we can see that Kylian Mbappe is the fastest soccer player in the world. But there are many reports which say many different footballers are faster.

Surprisingly though Salah and Haaland are not the fastest players in the Premier League in 2022. Both players have speeds of 36.6 and 36 km/hr respectively in 2022. They have also been very important to their respective squads.

The fastest player in the Premier League in 2022, is current Real Madrid and ex-Chelsea defender Antonio Rudiger. He has beaten the likes of Adama Traore, Mohamed Salah, Erling Haaland, and even Sadio Mane. Rudiger has clocked a speed of 36.7 km/hr and was instrumental in Chelsea‘s 2021 Champions League win.