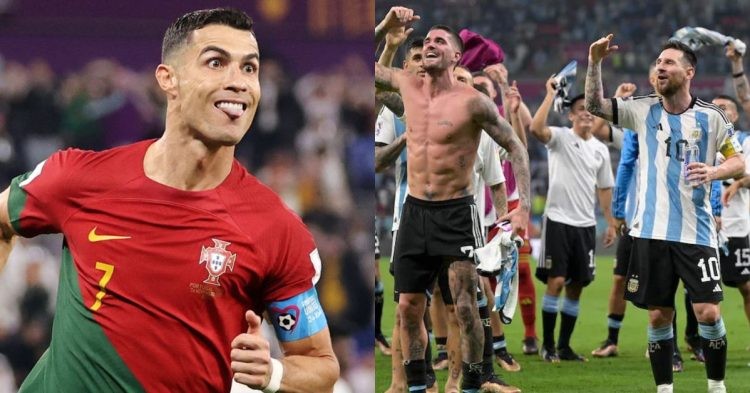 Two of the most decorated soccer players, Lionel Messi and Cristiano Ronaldo are playing in their 5th and final World Cup. Both the Ballons d’Or winners looking to complete their trophy cabinet that is missing the World Cup.

Ronaldo now 37, made his debut a year before a young Messi enchanted every Barcelona fan at Camp Nou. He even made his international debut before the Argentine. While Messi just played out his 1000th game, Ronaldo has long crossed this milestone with over 1100 career appearances.

Argentina played Australia in their knockout stage match at Ahmed bin Ali Stadium, Al-Rayyan, Qatar. La Albiceleste managed to edge past the Socceroos who gave the men in blue a tough fight till the end.

The Argentine himself didn’t know that it was his 1000th game and said he likes to live in the moment. He gave Argentina a perfect start by scoring the first goal. The goal meant more significance than Messi himself could imagine.

It is his first goal ever in the knockout stages of the World Cup for Argentina and his 9th in the World cup. With this goal, Messi has surpassed Maradona and Ronaldo, who have 8 goals, with his 9.

Julian Alvarez helped strengthen Argentina’s lead after he scored their 2nd goal in the 57th minute of the game. Argentina made good chances towards the end.

The Socceroos managed to claw one goal back thanks to a deflection from Enzo Fernandez. But, it wasn’t enough as Argentina will face the Netherlands in the quarter-finals.

How many games Cristiano Ronaldo has played?

Having won every elusive trophy the sport of soccer has presented, 5-time Ballons d’Or winner except the World Cup. Cristiano Ronaldo and Portugal will face Switzerland in their knockout stage match.

This will be Ronaldo’s 195th appearance for Portugal after he made his debut for the Selecao in 2003. With 118 goals, he holds the record for most international goals scored by an individual.

After he scored against Ghana, he became the only player to score in 5 consecutive World Cups. Portugal vs Switzerland will be Ronaldo’s 1110th senior career game. He will be hoping to secure a place in the last 8 just like Messi and Argentina.