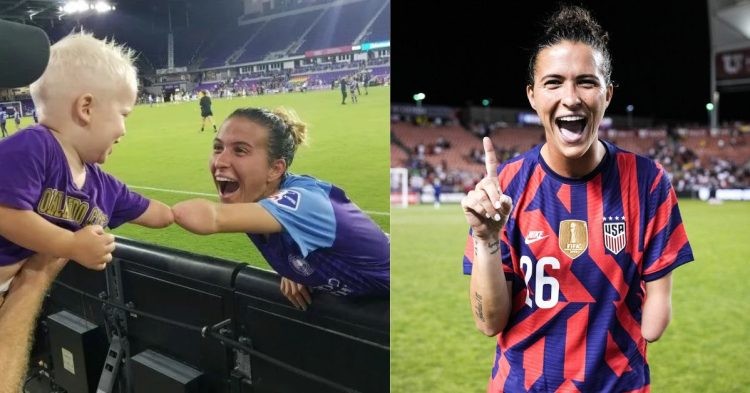 Soccer is a sport for all and even for those with deficiencies. That’s the story of NWSL and USWNT player Carson Pickett. She currently plays soccer in the US and has gone viral in recent times because of her arm.

Carson was born on 15th September 1993 in South Carolina. She was born without a left forearm which did not change over the course unfortunately. Despite the obstacles, Pickett has worked hard to become a successful professional soccer player in the country.

Pickett became the first player with a limb difference to play for the women’s national team. She spoke about the instance to Good Morning America a while ago. Carson said, “It’s a moment I probably will never be able to fully describe. My dad told me the night before, ‘When you go out there, take it all in.’ And I think that’s what I did when I first walked out on the field.”

Speaking about the hurdles she had faced, Pickett mentioned, “While I know that I am confident and comfortable with showing my arm, I know there are so many people in the world who aren’t. The feeling of being different and the anxiety of not fitting in is something that I have been through.” In 2019, a clip of an eighteen-month old boy went viral as he did a “fist bump” with Carson Pickett, who had the same disability as him.

In the 2016 NWSL College Draft, the Seattle Reign FC (now OL Reign) drafted Carson as the 4th overall pick. She went on to make her professional soccer debut just a few weeks later in their opening game of the season.

The club loaned the American player to Brisbane Roar for the 2017-18 season, where she scored her first goal in professional soccer. Despite moving back to Seattle, the club continued to loan her back to Brisbane in 2018 and in 2019 once again. In 2020, she won the club’s Player Of the Year award. After that, she moved clubs once again after the Orlando Pride secured her signature in a three-player trade.

2020 was a hectic year for all as the league was postponed because of the COVID-19 pandemic. Despite many efforts to participate in the restarted version of the tournament, Orlando Pride withdrew since majority of its players and staff tested positive for the deadly virus. Carson then moved to the Apollon Ladies before joining the North Carolina Courage a year later in 2021. The exact amount she receives through her current contract is unknown, but it is expected to be around $80-90,000 USD.

The US soccer world has witnessed Pickett posting images online with, Mackenzie Arnold. Seeing that the pair appear to be inseparable, rumors of them dating have arose on multiple occasions.

In February 2021, Carson dedicated an appreciation post on Instagram to Arnold. She wrote, “Happy Birthday to my number one! Cheers to more golden hour pics and adventures with ya. Welcome to feeling closer to 30 than 20, what a treat.” There haven’t been any confirmation from either of them about their relationship/friendship so far. But it seems like they are close and spend a significant amount of time together.

Mackenzie is also a soccer player, and currently plays for the English club West Ham United, and the Australian Women’s National team. She plays as a goalkeeper and has been significant for her teams over the years.

As for Carson Pickett, she will be looking to help the North Carolina Courage to move up the NWSL table this year. They currently sit at 7th place, just one point off the Chicago Red Stars, who are currently having the Final series playoffs spot.