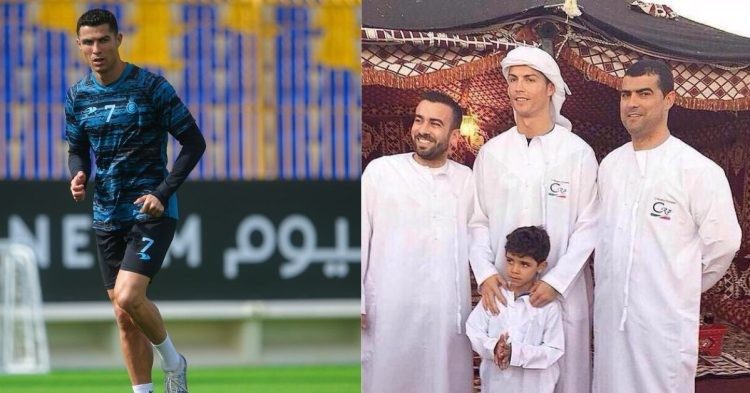 Cristiano Ronaldo's Al-Nassr move has created quite stir in the media (Credit: Twitter)

Cristiano Ronaldo has created quite a buzz since his transfer to Al-Nassr has become official. The 37-year-old Portuguese striker is one of the most influential athletes to have existed. So, naturally, any rumor related to him is bound to attract attention from the media and the fans. Religion is a very sensitive theme. However, a video has gone viral involving Cristiano Ronaldo in a particular religious theme.

Cristiano Ronaldo completed a transfer to the Saudi Arabian club Al-Nassr following a very rare unimpressive half-a-season in 2022. The Portuguese had a year to forget after his contract was terminated by Manchester United under a controversial situation. Al-Nassr was always the front-runner to sign the veteran Portuguese and finally landed his signature at the end of the last year.

The Portuguese’s decision since has been widely criticized by fans and pundits. Most of them believe that the $214 million per year contract is the main reason for him behind this move. The star man however has straight away denied those speculations and has clearly explained his reasoning behind his decision. He will probably be making his Al-Nassr debut in a friendly match against PSG.

A false claim that Cristiano Ronaldo said he loved Islam the most is viral on social media in connection with one of his interviews. An #AltNewsFactCheck | @vxnsh_shxhhttps://t.co/WLH5LJrrCM

However, it is pretty clear that Ronaldo does not need to be on the pitch in order to make it to the headlines. Very recently a video of Cristiano, sitting at an interview with a Muslim woman went viral and caused quite some chaos. However, the video turned out to be from January 2022 and was shown completely out of context.

Ronaldo’s interview video stating he ‘loves Islam the most’ isn’t the only clickbait that exists on the internet. An old picture of Cristiano wearing a thawb (a white robe with headgear) also went viral.

Very recently though, a random Instagram account posted a video of Cristiano Ronaldo in Juventus black and white shirt praying to Allah with hand gestures like a proper Muslim. The video has the caption “After a few years in Saudi”, and it takes no genius to identify the video as a fake one. The fans in the comment section, however, didn’t really show any negativity either toward the post owner or Cristiano.

The post has almost 4.3 million views and 136,000+ likes with almost 2000 comments. Most of the comment section is wishing that Ronaldo actually converts to Islam. One comment said, “Nothing is impossible. May Allah keep us on the right path and give us hidayah. Ameen,” stating that nothing is impossible in Islam. Another comment said, “Everyone in Saudi is praying for his hidayah,” sharing a similar view to the first comment.

A lot of people believe that it’s only a matter of time before Ronaldo turns to Islam. One fan comment said, “I tell you that day is not far when we hear the news about CR7 being converted to Islam inshallah,” believing with many others that Cristiano will become a Muslim. A few comments were there saying, “Not funny. Stop making fun of religion,” and, “stop playing with Islam,” stating that religious matters are not to be joked off.

Conclusively, it is clear that the comments have acknowledged that the video is not real, yet, have hoped for it to be real in the future. And most importantly, Cristiano Ronaldo is a Christian Catholic and has his own belief and faith.