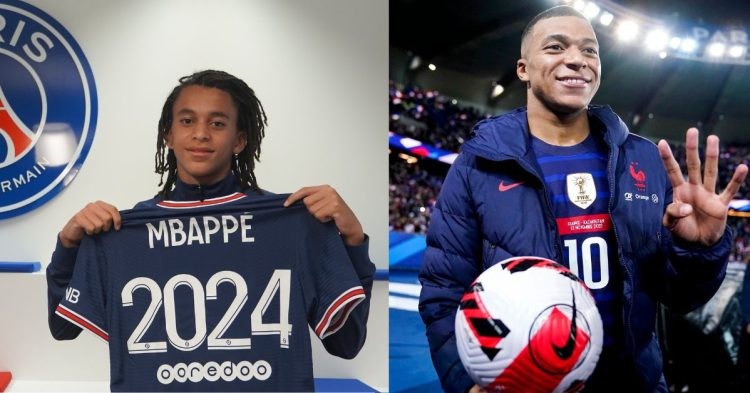 Currently, Kylian Mbappe is ripping apart defenses in Qatar as the star man of the French National team. But he is not the only Mbappe who is stealing the headlines. The PSG superstar’s 15-year-old brother Ethan Mbappe has created a lot of buzz with his performances in the U-19 team.

We have seen Ethan in the 2018 World Cup supporting his brother. The teenager has been seen as a ball-boy at Parc de Princes and even in PSG’s trophy ceremonies. Primarily playing in the middle of the park in the youth setup of PSG, Ethan has been in the limelight already, thanks to his brother.

Born on December 29, 2006, the 15-year-old can already handle the pressure. Laurent Glaize, a family friend of Mbappe’s, and also a scout of Ethan’s former team, has praised him. Today’s young players who get too much attention from the media often lack humanitarian qualities. According to Glaize, that is not the case with Ethan at all.

Does Ethan Mbappe play for France?

Soon to be 16, Ethan made his debut for the U-16 French team last December. PSG also seemed confident about his abilities and they have backed the confidence by extending his contract till 2024. He has already played for PSG in the UEFA Youth League, providing a few magic moments as well.

Predominantly a left-footed playmaker, playing in the attacking midfield, Ethan is a lot different from his brother Kylian.

A son of Wilfried Mbappe and Fayza Lamari, Ethan is 9 years younger than Kylian. He is only 15 now, but speculations about his prospect and comparisons to his brother started a few years back. His former and current coaches have acknowledged his obvious talent.

Abasse Ba and Glaize are certain about him being a professional soccer player, but not of his highest ceiling. Ethan is a massive fan of Lionel Messi and his fluent playing style and playmaker’s instincts back that up.

He is young and talented but also always under the constant microscope of the media. He needs to keep his feet on the ground and play his game. One day maybe we can see him play alongside his brother on the bigger stage.