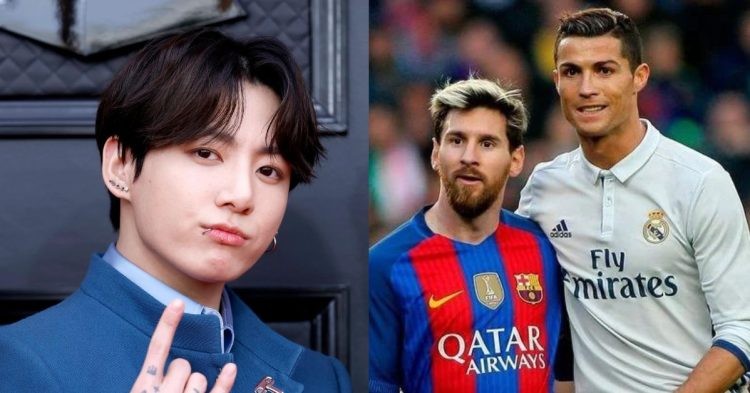 Jungkook joins Lionel Messi and Christiano Ronaldo as the only people in the world to have multiple videos surpass 20 Million views in just 24 hours on Instagram. @BTS_twt pic.twitter.com/B0opJkVvbs

The South Korean has joined an exclusive club consisting of football greats Lionel Messi and Cristiano Ronaldo. The Argentine and Portuguese superstars will embark on what will be most likely their last World Cup. Argentina begins its World Cup against Saudi Arabia, while Portugal faces Ghana.

Earlier this year, Jungkook joined Messi and Ronaldo in an incredible feat. The South Korean became one of the only three people to surpass 20 Million views in just 24 hours on multiple Instagram videos. Jungkook will perform his song Dreamers at the opening ceremony of the World Cup.

Ronaldo missed Portugal‘s first warm-up match due to a stomach bug. The Portuguese will be looking to have a great World Cup after his comments in the Piers Morgan interview could see him getting sacked by Manchester United. Messi scored in Argentina‘s 5-0 win over UAE in a World Cup warm-up match.

Jungkook and BTS have been the biggest sensation recently. The South Korean boy band has almost 72 million subscribers on YouTube and 69 million followers on Instagram. Their official Twitter account confirmed they will be releasing their newest song ‘Dreamers’ in a tweet that read “2022.11.20”. The song will be performed at the opening ceremony of the World Cup.

The World Cup opening ceremony will begin at 10 am ET/7 am PT. While the official line-up for performers has not been released by FIFA, Jungkook will be performing. Other possible performers include Black Eyed Peas, Robbie Williams, and Nora Fatehi. The opening match will kick off an hour after the World Cup opening ceremony begins. Pre-match predictions for the opener between Ecuador and Qatar indicate all three results are possible.