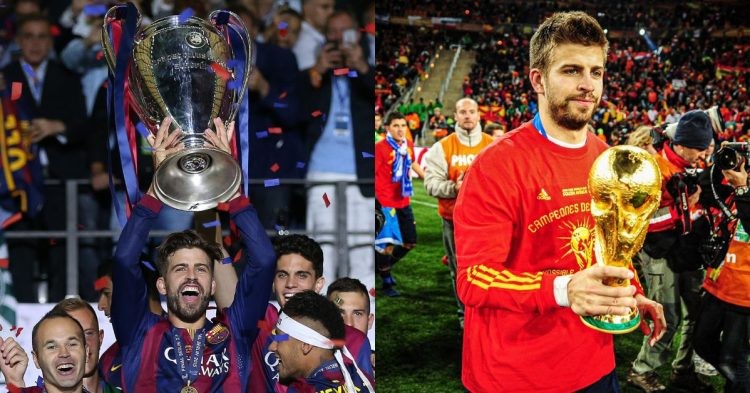 His contribution to the club of his dreams has not been forgotten by Barcelona fans. Pique has vowed to return to Barcelona in some form or the other. But he says that he will be an ordinary fan until then, supporting the club from the sidelines. Pique would terminate his contract with Barcelona next week, giving up about $30 million in wages.

Fans gave Barcelona’s deal with Spotify as a reason for Pique’s decision.

Homie just dodging the Shakira kits 😂 hate to see it.

It is not hard to see how distinguished a career Pique has had.

He may not be good now but Pique at his prime was one of the best defenders ever in recent times.

Nah, this club a joke at this point bruh.

Convincing players to retire because of their financial issues😭

On the other hand, some fans were happy the defender had left the club.

His poor recent performances do warrant some criticism, but he had been an integral part of the club’s success for around a decade.

Pique has played with many big names in the game. Cristiano Ronaldo and Lionel Messi are two of a large number of superstars Pique has played alongside. Even his opponents have applauded the defender’s career.

Pique’s former manager Pep Guardiola commended his fitness levels and commitment to the club. He said Pique is a big game player, and that big clubs require such players for success.

“All the big clubs need this type of player. It was an honour for me to be his manager.” ❤️ pic.twitter.com/IMnO0WV4T2

Arguably his biggest rival and one of the best center-backs of the past decade also congratulated Pique on his career.

His former captain Carles Puyol thanked Pique for his years of commitment to Barcelona.

Pique’s retirement at just 35 has been a huge shock to the footballing world. While Barcelona fans are relieved he is leaving the club, for both financial and footballing reasons, he has been a faithful servant to the club. He joined Barcelona all the way back in 2008 and is leaving after 14 years.

Club president Joan Laporta all but confirmed the major reason for Pique’s departure was financial troubles. “Gerard Piqué will always be a symbol of Barcelona. We’re in the process of a financial agreement to terminate the contract he wants to help the club. He understands our financial situation.”

He also confirmed Pique would be terminating his contract.