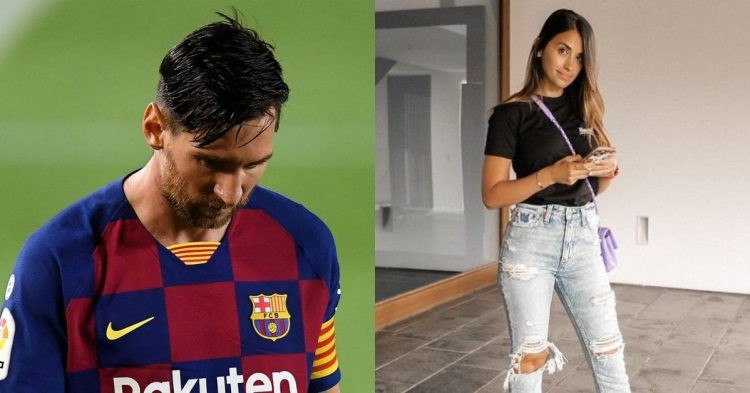 Lionel Messi and his relationship with Antonela Roccuzzo have been in the public eye for a long time. The couple has reportedly been together for around nine years and has lived in Barcelona. Following Messi’s departure from the club, the whole family would have to relocate to Paris.

Fans and Messi both were disappointed with the fact he was leaving for footballing reasons. There were some personal repercussions to the move as well. It is never easy for anyone to pack up and move to a new country with a new language. This is compounded further by the fact that Messi’s family has 3 young children.

Lionel Messi on how he broke the news to his family

In an interview with Guillem Ballague, Messi explained the situation. “After my father broke the news, obviously I was disappointed. And I had to prepare to see how I was going to tell Antonela so we could tell the kids together.”

#ICYMI: I interviewed Leo Messi yesterday for @BBCSport after he completed his move to #PSG. He speaks about leaving #Barcelona and how his family took the news.

“Well, I told her, obviously we cried, we were bitter.” Messi left Barcelona for PSG in 2021 and has since scored 18 goals and 21 assists in 45 appearances.

On being asked how they broke the news to their kids, Messi said, “Then we got up to see how we could tell the kids, the best way to communicate it because we had already told them in December that we were going to stay.”

Messi’s deal at Barcelona was all but signed, but unfortunately due to financial reasons, Barcelona failed to keep their best player at the club for any longer.

Who is Thiago Messi? – Here’s what Lionel Messi had to say

“We knew the kind of blow it would be for them, especially Thiago,” Messi said.

Messi said he was glad his kids settled into their new life very quickly. “Sometimes we think too much, but kids get used to things and accept them in a way we don’t think about.”

“Thiago, he might be keeping it all inside, but he’s showing he’s happy and content, prepared for the change. But I know him, he’s like me. I know he’s suffering a lot on the inside, without showing it.”

Messi and his family have since seemingly settled in well to life at the French capital. “It’s a new experience for him, it will help him grow personally, and I’m sure the five of us will be spectacular.”

He went on to say he is very happy at the club. Messi had left his home in Argentina at a very early age, so on a personal level, the move would not have been as challenging as it was for his family. “We couldn’t sleep or rest for days.”

Messi’s future internationally seems to have been decided. He announced this World Cup to be his last. Messi’s future at PSG on the other hand, remains uncertain beyond the 2023 summer. He remains heavily linked with a move back to Barcelona, and it seems very likely that his chapter, whether as a player or not, remains unfinished at Camp Nou.