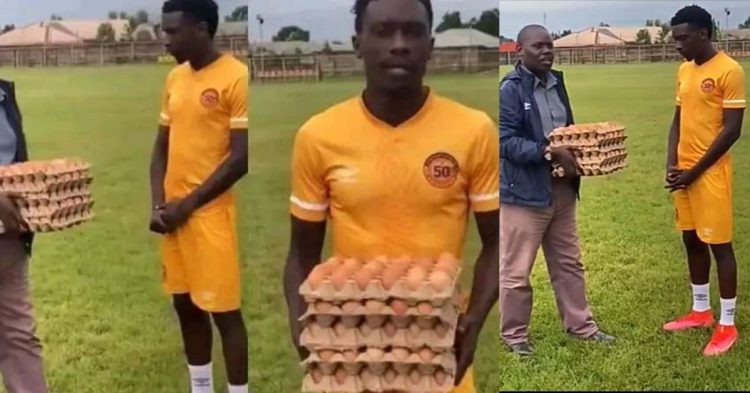 In a bizarre set of events, a player in the Zambian league was awarded 5 egg trays for a Man of the Match performance. Yes, you read that right, 5 trays of eggs. This took place in a league match in the Kitwe derby where the player of the match, Kennedy Musonda was awarded 5 egg trays for his performance. He scored a goal for Power Dynamos in the historical derby match against Nkana in the Zambian Super League.

The club sources told the media that the two trays given to Musonda were for the goal that he scored and the other 3 were for his tremendous man-of-the-match performance. But Musonda wasn’t very pleased with the award as evident. A fan on the post commented, “It made me sad”.

It is quite natural to feel like that when you see players in other leagues bagging hefty cash amounts as awards and you are given some egg trays after putting in a match-winning performance for your team in a derby.

Kitwe derby is a historical derby played between Nkana and Power Dynamos after Power Dynamos gained promotion to the top flight of Zambian football in 1979. The two teams belong to the Copperbelt town of Zambia and the home stadiums of both teams are only 4km away from each other.

Fans mock the Zambia league for their bizarre egg reward

As soon as the news broke in the media, the ever-fresh and active soccer fans hopped on to the news and mocked the Zambian league for rewarding a man-of-the-match player with some egg trays.

A fan being sarcastic towards the Zambian league wrote: “Considering the cost of eggs now, it’s a good award.” Surely he didn’t mean it because no matter how pricey eggs get, they are still eggs, they are not an award to give to your best player.

Another fan took a jibe at the Premier League for giving an empty award to the man of the match which is of no use to the player and praised the Zambian League for the thoughtful award. He said: “This is better than the fake can of deodorant that the PL gives. I love it. Imagine getting a basket of fresh fruit and vegetables for the player of the month. I think that would be awesome.” Did he really mean it? We’ll never know.

We spotted another fan who appreciated the Zambian League for their award which would be useful to the player rather than a statue that is of no use. He said: “You don’t get a statue thingy to show off, but instead enough eggs to make a giant stack of pancakes for the fam next Sunday morning. I see no wrong with this”

The internet continues to react to the bizarre event ever since it got reported in the media and soccer fans can’t hold back their humor and are mocking the Zambian League. Let’s see whether the League representatives come out and say anything about the incident in the media. Stay tuned!