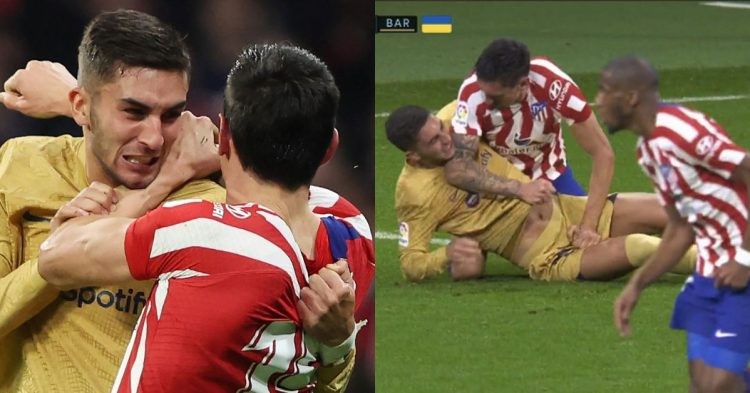 During a La Liga tussle between Barcelona and Atletico Madrid, Ferran Torres and Stefan Savic were caught grappling each other. It was like they had entered into a wrestling match on the soccer field. During that grapple, however, one fan noticed a peculiarity about Savic’s grip on Torres.

Barcelona dominated the early exchanges in the high-pressure clash and Atletico was forced into mistakes. Just past the 20-minute mark, Ousmane Dembele gave Barcelona a deserved lead. He dispatched an assist from Spanish youngster Gavi with a first-time shot to get past Jan Oblak.

Atletico grew into the game but was not looking clinical in front of the goal. On the other hand, Dembele missed two good chances to keep the door open for the Spanish rivals’ comeback. Barcelona keeper Marc-Andre ter Stegen made a crucial save off an Antoine Greizmann shot late in the second half to deny the hosts.

Two minutes into stoppage time Torres and Savic had a tussle for the ball. The pair, however, continued to fight even after the ball had gone. Both the players’ aggression was spotted by the referee and they were sent off for violent conduct. Barcelona held on to seal the three points and win the match 1-0.

Fans react to the Ferran Torres and Stefan Savic grapple

The hard-fought low-scoring game created frustration all around the players. Savic and Torres let that frustration get to them and ended up in a nasty battle. A fan noticed how Savic gripped Torres’ crotch area and commented, “bros really squeezing it.”

Savic dispossessed Torres on the halfway line and as the play continued, the duo fell to the ground. Spanish ace Torres appeared to pull at Savic’s tightly cropped hair. In retaliation, Savic momentarily appeared to grip Torres’ crotch area and then got him into a headlock. Both got up and shoved each other away but the official had seen enough to send them off. Here are some of the fan reactions:

Savic was grabbing his balls

One Twitter user even accused Savic of trying to make Torres unable to give Luis Enrique a grandchild. He was hinting at the relationship between Enrique’s daughter and Torres. The user commented, “trying to avoid Luis Enrique getting a grandchild.. this man must hate Barca so much.”

trying to avoid Luis Enrique getting a grandchild.. this man must hate Barca so much

The three points saw Xavi’s Barcelona create a cushion of three points between themselves and rival Real Madrid at the top of La Liga. The Blaugranas are also 14 points better than Diego Simeone’s fifth-placed Atletico.