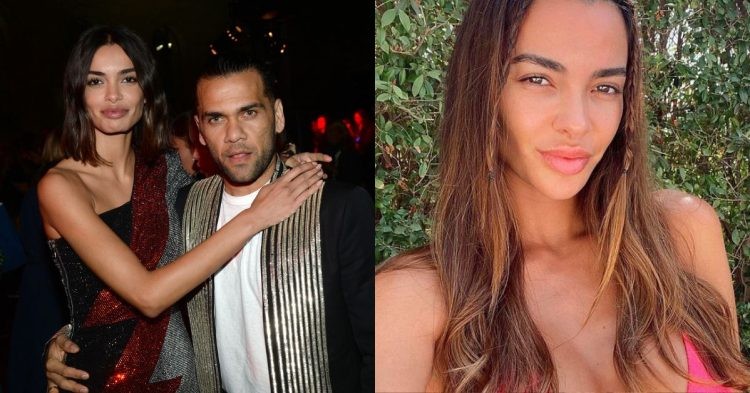 Brazilian right-back Dani Alves is married to Spanish model Joana Sanz. They were long-time partners before they got married in 2017. Alves, now 39 years old, is still playing after leaving his second stint at FC Barcelona in 2022.

Alves is the most decorated soccer player in the world. He has won 43 trophies in his career. He has played for the best clubs in Europe including Barcelona, Juventus, and PSG. Alves was playing for Liga MX club Pumas UNAM before his contract was terminated by the club following his sexual assault charges.

Here is all you need to know about Alves’ wife Sanz, who is a supermodel that has been strutting the catwalk since she was 17.

Alves and Sanz started dating in 2015 after they were introduced by a mutual friend. The supermodel was based in Madrid and had been sharing a flat with a friend of Alves. After a year in Turin with Juventus, where Alves played, the pair hooked up.

In a Spanish magazine La Vanguardia, Sanz said she had turned down two of Alves’ proposals before deciding to marry him after a third. She said in 2016: “Dani asked me in the hotel room alone. We do not like [putting on a show].”

“It was splendid… he already asked me three times.”

According to reports, the couple had an extremely private ceremony in 2017 in Ibiza. Not many knew about the wedding.

What are Joana Sanz’s profession and net worth?

Sanz was born on September 6, 1993. She is a Spanish model. Sanz began studying Psychology in college but dropped out and decided to devote her time to getting better at modeling. Sanz reportedly has a close association with many big names in the fashion industry as she has worked for brands like Jimmy Choo, Gucci, L’Oreal, and Rosa Clara among others.

Sanz’s estimated net worth in 2023 is around $1 million. She and her husband are also fan favorites on social media due to their funny videos and photos. Sanz has more than 750,000 followers on Instagram and earns from paid partnerships as well.

How tall is Joana Sanz?

Sanz has an average height of 5 feet and 10 inches and weighs around 114 pounds. Sanz has a figure made for a model and she shot to fame as one at the age of 17. She appeared in the Supermodel of the World contest for the top modeling agency Ford.

Sanz and Alves do not have any children of their own. She, however, has become like a second mother to Alves’ kids from his previous marriage. Sanz has revealed that the secret to their relationship is laughter. They will now be entering the sixth year of their marriage.

Dinora Santana was born in Rio de Janeiro on February 20, 1991. She graduated in Economics and worked at a bank soon after. Santana is an influential woman and at 19 years of age, she got FIFA’s approval to become a sports agent. She became one of the most popular agents in the soccer world and served as her then-husband’s agent. She helped him renew at Barcelona a few times while also facilitating his move to PSG.

Dinora is an active member of the sports industry and is an agent for the German company Kick & Run Sports Management. The management company represents over 45 soccer players.

Why did Alves and Santana get divorced?

Santana got married to Alves in the year 2008. They had dated for almost six years before it. They had two kids together before getting a divorce in 2011. The couple had mutually ended their relationship but remained on friendly terms for the sake of their kids.

In an article by ‘Globo,’ it was revealed that the couple’s professional relationship has not been hampered. Santana mentioned that she often continued to help Alves with his nutritional needs. The exact reason for their divorce is unknown because the couple did not utter a word about it.

However, there were rumors of Alves and actress Carol Macedo dating just three months after Alves’ divorce. This report was denied by his team.

Does Dani Alves have kids?

Alves has two kids with his ex-wife Santana. A daughter, Victoria, and a son, Daniel. The exact birthdates of the kids are unknown. Alves’ kids have been spotted watching his matches at the stadium cheering for their father.

From his second marriage with Sanz, Alves has yet to have children. Sanz, as of now, is the mother figure in the lives of Alves’ children. Sanz has also been spotted supporting Alves by being present in the stadiums.