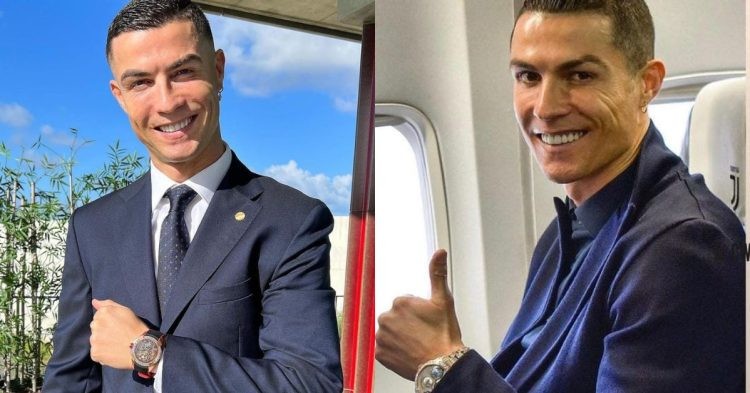 Cristiano Ronaldo is one of the richest athletes in the world and he’s not afraid to show it off with his luxurious collection of various items. He has an insane collection of unique and different watches, which are valued in millions. However, there is one man, whose one watch puts the Portuguese’s entire collection to shame.

Cristiano Ronaldo’s net worth is around $500 million at this moment. And it will go upwards following his $214 million per year deal at Al-Nassr. He has always been one of the highest-paid players on the planet and has bought a lot of expensive commodities throughout the years. Expensive cars, lavish million-dollar apartments, and most certainly different and exclusively designed watches.

How much is Cristiano Ronaldo’s watch collection worth?

We have seen Cristiano Ronaldo displaying his super expensive watch collection on his Instagram. At 37 years, the Portuguese is one of the biggest fashion icons as well. His watch collection is worth almost $10 million. Let’s look at some of the most expensive and rare ones in his collection.

The most expensive watch in Ronaldo’s collection is, his Girard Perregaux Planetarium Tri-axial, which is worth $2 million. The bezel and the bracelet are set with baguette-cut diamonds. It has a hand-painted titanium Earth model. The Earth rotates on a 24-hour cycle and the triple-axis tourbillon is the rarest.

The second most expensive watch is a Franck Muller Cintree Curvix Tourbillon, which is worth around $1.5 million. The white base of the watch gives it a very unique look. The watch ring is surrounded by baguette diamonds. The Franck Muller Curvix is the Portuguese’s one of the most favorite.

The third most expensive one is also a Franck Muller Tourbillon which is worth around $1.4 million. The diamonds in this watch are set in a unique technique called ‘serti mysterieux’. It means the diamonds set in the watch have no visible mounting.

The next watch in the ranking is Ronaldo’s Jacob & Co. Grand Baguette Diamond. It might only be the fourth most expensive watch in his collection with a worth of $1 million, but it is probably the most unique one. The Grand Baguette has five different dials for five different time zones tracking. It has 761 diamonds and only six of these were ever manufactured.

The fifth and final watch of this iconic collection is Rolex GMT Master Ice, which is valued at around $486 thousand. The GMT Master is covered completely by 30 carats of diamond all over it. The valuation of this might be significantly less than its competitors; it is one of his favorites in his collection.

According to Forbes, Floyd earned a whopping $275 million in his fight against Connor McGregor back in 2017. So it’s not news that he will live his life in ultimate luxury. Floyd’s custom-made Jacob & Co. Billionaire III is alone worth $18 million. It is the only one of its kind in the world.