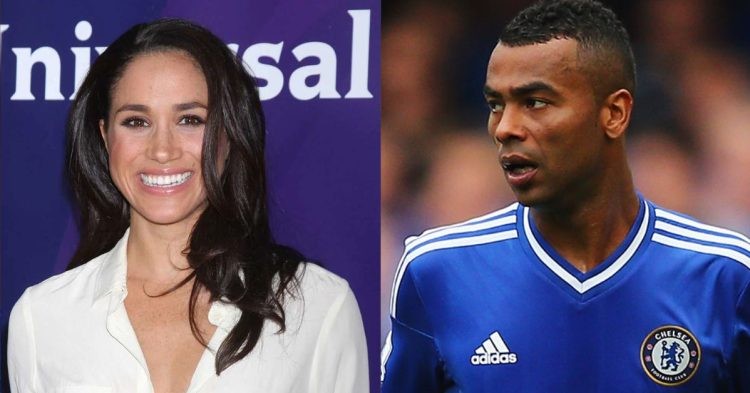 Meghan Markle was reportedly on the verge of dating an English soccer star before her marriage to Britain’s Royal, Prince Harry. The news broke out after Meghan’s friend and ex-wife of former Chelsea striker Jason Cundy, Lizzie Cundy told the reporters while talking to Grazia.

The soccer star who Meghan was about to date was former Arsenal and Chelsea fullback, Ashley Cole. According to Lizzie, Meghan who divorced her producer husband, Trevor Engelson, wanted to have a life in the U.K. and wanted to date an English guy. She said: “Meghan said she loved London, and would love an English boyfriend, so I went through my phone to see who I knew that might be a good fit”

Ashley Cole who has 107 caps for the England football team and featured in three World Cups for England in 2002, 2006, and 2010, was considered one of the best left-backs of his generation and is an all-time Premier League great. Cole started his coaching career after he joined Derby County as part of Frank Lampard’s coaching staff and joined Lampard at Everton as well in 2022.

It has been reported by Lizzie that Cole who at that time had divorced his wife, wasn’t interested in Meghan and thus rejected the move. She said: “I tried to find her a boyfriend – Ashley Cole wasn’t so keen – but I did try to fix her up, which is funny looking back.”

There are always two sides to a story and the same is with this one as Meghan’s other friend and journalist Katie Hind claims that it was Meghan who rejected Cole’s advances after she found out that he was a ‘love-rat’. Katie stated that Cole had been texting Meghan and was keen on going on a date with the Suits actress. She claims that Meghan showed her the messages from Cole.

She said: “[Meghan pulled an] iPhone from her handbag, she pointed to the picture of a good-looking man on her Twitter account, and said: ‘Do you know this guy, Ashley Cole?”‘He follows me and he keeps trying to talk to me on Twitter. He’s trying really hard. He wants to go out on a date while I’m over here in London. What do you think? Do you know him?”

It is not clear who called the end of the budding romance before it even started but we can only imagine how life could have turned out for Meghan had she dated Cole and not married Prince Harry.

Meghan Markle and Prince Harry’s battle With the Royal Family

Prince Harry and Meghan married on May 19, 2018, in front of millions of viewers and were the hot topic for the media at the time but it is safe to say that they still are the hot topic for the media albeit for the wrong reasons. The rift in the Royal Family isn’t something that is not visible to the public eye and with the latest Netflix documentary “Harry & Meghan” featuring Prince Harry and Meghan and now Prince Harry’s recently released memoir,Spare, the rift has only got more intense.

The speculated reasons for the rift have been many with some journalists reporting that the wives of the two Princes, William and Harry don’t get along while others suggest that the Royal family has been biased towards Prince William and his family while they have been harsh against Harry and Meghan in the media.

In his Netflix documentary, Harry says that the relationship between the brother started to derail after Prince Harry and Meghan to the shock of the Royal family, announced that they will be taking a step back from their Royal duties in 2020. The ‘rift of the Royals’ has always intrigued fans and now with Harry and Meghan speaking freely in front of the media, we can safely say that the drama has only begun and there is much more to be seen in the ongoing rift.