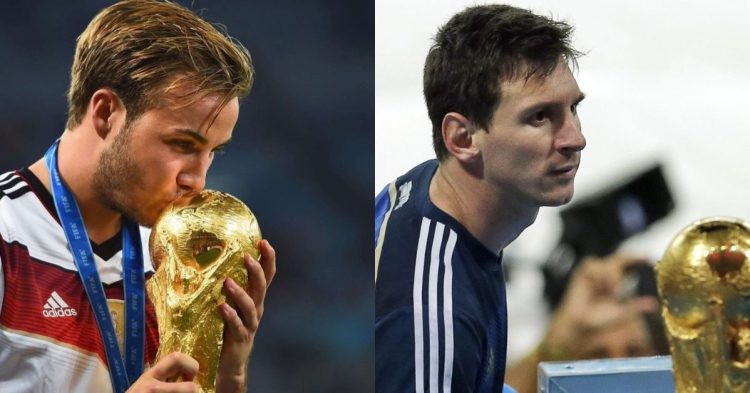 The highlight of Mario Gotze’s career has been his 118th-minute winner to give Germany the World Cup. Very few can say they are the reason their country won the biggest sports competition in the world. On the other side of this story was one of the most consistent and exciting players on the planet, Lionel Messi.

It’s been a while… 😉 Five years to be exact!

I am very happy to be part of Germany’s World Cup squad again and thankful for the trust of Hansi Flick and his coaching staff! @DFB_Team pic.twitter.com/6BLvrC3dm3

Messi and Ronaldo both have been at the top of world football for over a decade. Both have deserved a World Cup, but neither has won one yet. For Messi, this is definitely the last chance. For Ronaldo, it is his last chance in all senses but name. Mario Gotze has also been included in Germany’s 2022 World Cup side, having not played for the German national team since 2017.

In terms of stats of goals and assists, Gotze comes nowhere near Messi. At the club level, Gotze has made 292 appearances, scoring 69 goals. For Germany, Gotze has scored 17 goals in 63 appearances. He has played at just one World Cup, scoring 2 goals in 6 matches. He currently plays for the Bundesliga club Eintracht Frankfurt.

Messi is one of the greatest players of this generation. Messi has made 520 appearances for Barcelona and scored 474 goals. Meanwhile, for PSG, the Argentine has scored 13 goals in 38 appearances. For Argentina, he has made 164 appearances, scoring 90 goals. These numbers are unprecedented and have been matched only by Cristiano Ronaldo.

Unfortunately for Messi, Gotze has the one stat that Messi longs for the most. Gotze is a World Cup winner, and fans across the world are excited to see his return. Ronaldo fans were obviously ecstatic that Messi hadn’t won the World Cup in 2014, and are jubilant to see Gotze’s return.

Argentina and Messi fans would not have any fond memories of Mario Gotze.

Some fans believe Gotze does not deserve his call-up to the Germany squad for this World Cup.

Other fans believe Germany is nowhere near their best. They feel Gotze’s call-up will mean nothing if Germany gets knocked out in the group stage itself.

Just to get knocked out in the groups 😭

Why didn’t Mario Gotze play for Germany since 2017?

After 2014, Mario Gotze was all set to become part of a big club. Unfortunately for Gotze, recurring injuries meant he could not start regularly. After poor spells at Bayern Munich and Borussia Dortmund, Gotze made his way to PSV. He now plays for the German side Eintracht Frankfurt.

Gotze also suffered from a metabolic disease. The German World Cup winner suffers from muscular myopathy, a muscular disorder that affects the fibers in the muscles, meaning they do not function correctly. Since then Gotze has worked endlessly and has finally made his return to the German national team after five years.

Hansi Flick, the German team coach said, “He’s in top shape, can work for 90 minutes three times a week – that’s a good prerequisite. I think we all know that Mario is a brilliant footballer who has played at a very high level in the last few games.” At Frankfurt, Gotze has scored 2 goals in 14 appearances.