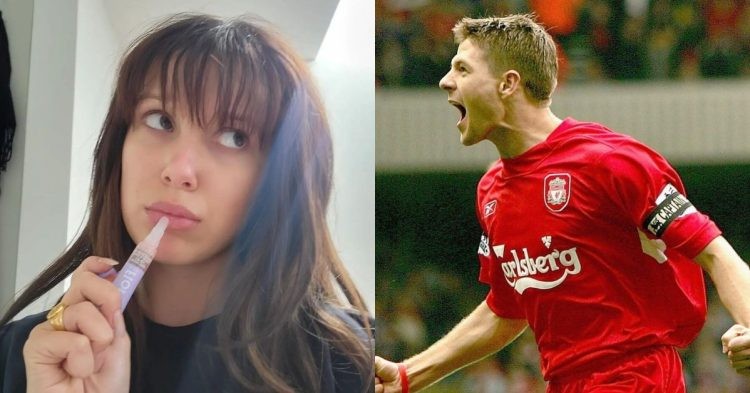 Liverpool is one of the biggest and most successful English clubs in terms of rich history. They have a massive fan following around the world and today we will talk about an unexpected yet very famous supporter of the club. Actor Millie Bobby Brown is a Kopite and her knowledge about the club is significantly very good.

Millie Bobby Brown has acquired worldwide fame for being the star of the Netflix show Stranger Things. She first appeared in the show back in 2016 and hasn’t looked back since. Besides being an actor, she is really passionate about soccer. Not only she supports the Merseyside club ardently, but she believes that girls should also have the same ground of respect for playing the sport, as much as the boys do.

Millie has kept it no secret that she loves Liverpool and the biggest motivation behind it is her family. On new year’s eve of 2017, Millie attended a Liverpool vs Manchester City Premier League match, where she saw her team, beat the Manchester side by a 1-0 scoreline.

Before the match started she sat for an interview with the LFCTV. She said, “My family have been big supporters and big fans, since I was very young,” talking about the reason she started supporting the club. Millie sacrificed her night’s sleep to watch Liverpool play during her web series shoot in different parts of the globe. She is young and a very busy person, but she’s quite passionate about supporting her beloved club.

If one-club-player is an existing term, Steven Gerrard carries the best example to define that. The former legendary midfielder spent an impressive 26 years at the club starting from his youth level. Every Liverpool fan absolutely adores and respects him as the best player to ever play for the club and Millie is no exception here.

Steven Gerrard is comfortably the best player to ever grace the Liverpool red shirt. He is one of the most prolific goalscoring midfielders in the sport, having scored 125 top-flight goals for the club and another 21 for England. Stevie G was an integral part of the iconic 2004-05 Champions League final showdown against AC Milan. Starting with FA Cup, Supercup, and Carabao Cup he won it all at Anfield, but the Premier League always eluded him.

In the same interview she gave to LFCTV in 2017, Millie talked about how she fell in love with Steven Gerrard. She said, “My brother is a big part of it. He kept telling me about Steven Gerrard when he was playing. I started falling in love with him. It was a big moment in my life,” explaining how she started supporting Liverpool.

In a very recent interview with the Vanity Van YouTube channel, she said that she does not like to be called Eleven by her fans. In the Stranger Things show the name of her character is Eleven and she said she would rather prefer to be called 8. When asked, she said, “It’s my favorite soccer team player, Steven Gerrard,” showing her love for Steven Gerrard and Liverpool.

Where is Millie Bobby Brown from?

Mille Bobby Brown was born on February 19th, 2004 in Marbella, Spain. She was her father Robert Brown, a real estate agent and Kelly Brown’s third child. Her family moved to Bournemouth England when she was four. They stayed there for another four years. Millie moved to Orlando, Florida with her family back in 2013 shortly before getting into the acting line.

Millie Bobby Brown is one of the most famous celebrity soccer fans, who support a particular club. Her love and affection for the Merseyside Reds seem to be very firm in the upcoming future. We all wish her and her beloved club love and success.