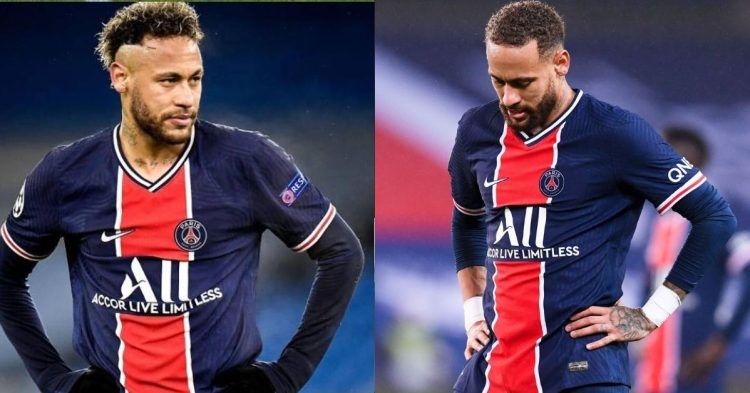 The French media have come in hard against Neymar Jr. for his performance against 5th placed Rennes which the table toppers PSG lost by a goal to nil. The Brazilian didn’t look at his best throughout the game and has since been hugely criticized by the French media.

All three of PSG’s star trio, Messi, Mbappe, and Neymar featured in the game against Rennes but failed to make an impact and suffered a loss which resulted in 2nd placed Lens closing the gap to only 3 points with the league leaders followed by Marseille at 3rd place who are 5 points behind PSG.

RMC Sport’s Journalist, Daniel Riolo was really upset with Neymar’s performances against Angers and Rennes. He criticized Neymar’s ability in the middle of the park and that he falls to the ground easily. Neymar has been criticized for falling too easily multiple times in his career and has even been labeled as a ‘diver’ in the past.

He said: “It’s ridiculous, the image he gives! Neymar is constantly rolling around on the ground, as soon as you touch him, he falls to the ground. It’s bad.”

Riolo raised alarm bells around the PSG team as he feared that their performance against Rennes just a month before facing Bayern Munich in the UCL Round of 16 should be worrying for the management. He also criticized Neymar’s control in the middle of park where he kept on losing balls against Angers.

He said: “As against Angers in the middle of the week, the Brazilian went too low looking for balls and tried too many times to make the difference on his own. The result was that he lost balls in difficult areas and almost never caused danger in the Rennes area. A worrying performance a month away from Bayern”

Riolo criticized the transfer of Neymar and raised questions about whether Neymar’s record transfer of $263m was even worth it, he asked whether Neymar has justified his price tag and called him the biggest failure in the history of football.

He said: “Do we realize that Neymar, in terms of hiring and salary, is the biggest failure in the history of football? I can’t think of a bigger failure for what it cost, it’s horrible.”

Neymar has struggled with injuries throughout his career and suffered an injury in the World Cup with Brazil and it looks like he hasn’t recovered from it even though he started the season brilliantly racking up 11 goals and 10 assists.

Neymar Jr. joined PSG from F.C Barcelona in 2017 in a record transfer of $263 million. Neymar was in the form of his life at Barcelona where he was a part of the legendary MSN trio (Messi, Suarez, and Neymar) but he chose a move to PSG allegedly because he wanted to get out of Messi’s shadow and create a legacy of his own.

He won the treble with Barcelona in 2015, scored 39 goals in all competitions in the season, 10 of which came in the UEFA Champions League where he finished as joint top scorer along with teammate Lionel Messi and Cristiano Ronaldo. He has scored 77 goals in 124 appearances for Brazil and is currently tied as Brazil’s all time highest goal scorer with the legendary Pele.

Neymar was also ranked third in the Ballon d’Or award ranking in 2015 and 2017 after recording brilliant seasons with the team and individually. He was featured twice in the FIFA FIFPRO World XI.

Neymar also won the FIFA Puskas Award in 2011 while he was in Santos. He had an impressive number of 136 goals in 225 appearances before his big move to FC Barcelona in 2013.

Neymar was touted to be the next big thing after Lionel Messi and Cristiano Ronaldo. He showed glimpses of what he could do with Barcelona and even at PSG but injuries harmed his resolve. The emergence of Kylian Mbappe and he becoming the poster boy at PSG was another setback for Neymar’s career.