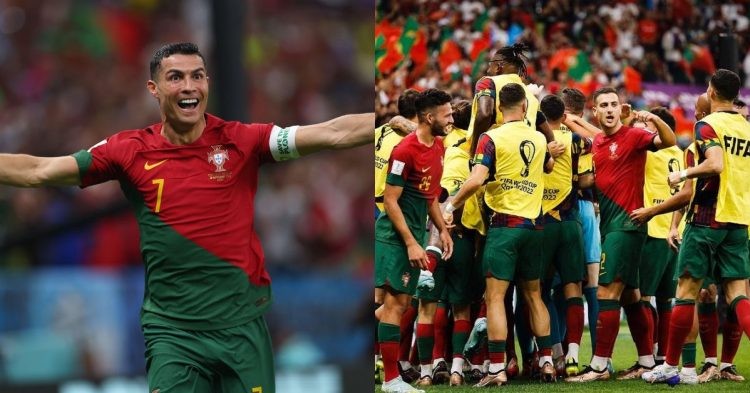 Cristiano Ronaldo is undoubtedly one of the biggest personalities in the world. Ever since he did that bombshell of an interview with Piers Morgan, the entire world has had its eyes set on the Portuguese star. He let everyone know that he was unhappy at Manchester United by claiming that he had no respect for the manager, Erik ten Hag.

That ultimately led Ronaldo and the United board to decide that it would be best if his contract was terminated. Since then, he has been the talk of the town. This has been the case even in the middle of a World Cup that occurs every four years. Recently, Ronaldo attracted plenty of attention when he left the pitch early after Portugal won the game against Switzerland.

There were many rumors surrounding the situation, as some even mentioned that his relationship with Fernando Santos and the rest of the team was damaged. The reason for this would be the fact that Fernando Santos left him on the bench for a do-or-die game against Switzerland. Ultimately, that couldn’t have worked out better as his replacement, Goncalo Ramos, bagged a beautiful hat trick.

Cristiano Ronaldo expresses solidarity with the rest of the Portugal squad

Together with that, some even claimed that Ronaldo wanted to leave the Portugal camp. Recently, he hit back at all those critics. The former Real Madrid star said that he would rather not score a goal at the World Cup if it meant Portugal winning the tournament. That showed how Ronaldo had his priorities lined up. People surprisingly claimed that he was unhappy about not playing even when Portugal won.

Today, Ronaldo decided to set the record straight once again. He posted a tweet with an image of the Portugal squad. Together with it, he wrote, “A group too close to be broken by outside forces. A nation too brave to let itself be frightened by any adversary. A team in the truest sense of the word, which will fight for the dream until the end! Believe with us! Strength, Portugal!”

The tweet comes across as a warning to the critics who claimed that Ronaldo was self-centered. There were even rumors that mentioned that the Portuguese players were disappointed with Ronaldo. However, the 5x Ballon d’Or winner wants everyone to know that the media can’t separate the Portuguese squad right now.

The former Manchester United striker has mentioned that seeing Portugal win the World Cup will be his biggest dream. And now that the skipper has claimed that the Portuguese team will fight for that dream until the very end, the morale in the dressing room will surely be high. Ronaldo and Co. will be aiming to get past Morocco in the quarterfinals in the coming days to continue their journey to the prestigious golden trophy.