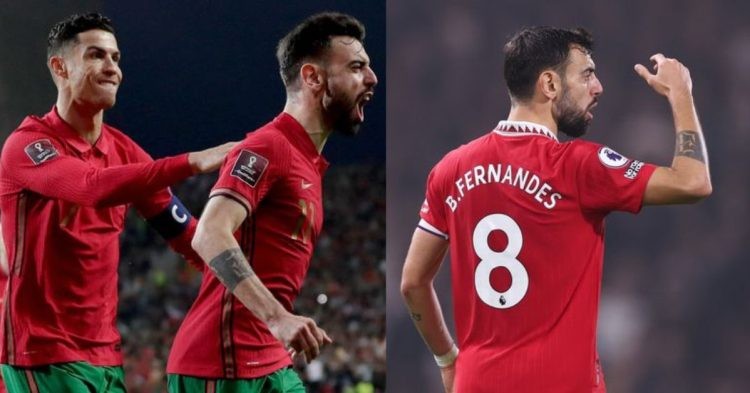 Fans misinterpret comments made by Bruno Fernandes as a dig against Cristiano Ronaldo. (Credits: Twitter)

After the massive derby win, Manchester United star Bruno Fernandes talked about how the Red Devils have become more of a team recently. This comment has been misinterpreted by many fans as a swipe at his former clubmate Cristiano Ronaldo. A fan slandered Fernandes calling him a “mediocre player”. He tweeted, “A very mediocre player acting big in the face of greatest CR7 smh.”

United played out a fantastic first half but was unlucky to go into the break with the scoreline 0-0 in their derby against Manchester City on Saturday. In the second half, however, they lost control of the game. Kevin de Bruyne found Jack Grealish on the hour mark to give City the lead. But the resurgent team built by Erik ten Hag did not go down easily.

Fernandes scored a controversial goal in the 78th minute and Marcus Rashford scored again four minutes later to lead 2-1. United saw out the clash and is now just a point behind City in the Premier League table.

After the win, Fernandes talked to the media. His comments were misinterpreted as a dig against his international colleague Ronaldo. The United no. 8 said, “We used to be individuals, now we are a team. You can see a proper team that works for each other.”

Fans did not let this slide. Here are some fan reactions calling out Fernandes for what he said.

Of course he was taking a swipe at Ronaldo, and he’s right. Allegri said the very same about Juventus they got rid of Ronaldo. 🙄

Bruno knows Penaldo is finished, saved you from a click

Interesting comment from Bruno around people playing for themselves before and now Utd are a proper team. Sounds very much like a dig at Ronaldo

Fernandes has taken to Instagram to explain his comments. According to him, the media has twisted his words into making him a villain.

Former Sporting Lisbon star Fernandes uploaded an Instagram story to explain that he took no swipes at Ronaldo. He said, “I know that is difficult to see Manchester United doing well, [but I] don’t have anything to [say] about us on the news apart [from] good things!”

“Do not use my name to attack Cristiano!” pic.twitter.com/yKMmn5vzVm

“Don’t use my name to attack Cristiano. Cristiano was part of our team for half the season and as I said in many interviews, everyone since Liverpool is being amazing and acting like a proper team and you can see the results. We carry on!’”

Ronaldo and United mutually terminated the contract of the player in late November. Since then, Ronaldo has made a move to Saudi Pro League side Al-Nassr. He has signed a bumper contract worth over $200 million a year. He is, however, yet to make his debut for Al-Nassr even though his transfer was announced late last year.