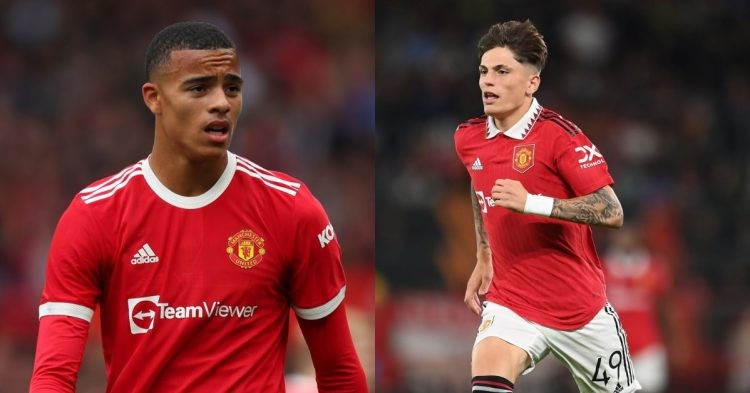 Manchester United is one of the biggest clubs in the world. They have 13 English Premier League titles to their name. One of the main reasons for that would be the belief they place in the youngsters on their name. The entire world knows of the Class Of 92′. It included the likes of David Beckham, Paul Scholes, Ryan Giggs, Nicky Butt, Gary Neville, and Phil Neville.

The United DNA consists of giving big opportunities to younger players, who have the potential to take on the soccer world. This has been what they have done in recent years. However, things took a drastic turn when their best young player, Mason Greenwood was hit with a sexual assault allegation by his then-girlfriend Harriet Robson.

As the soccer world turned on Greenwood for his alleged crime, some of the United fans were disappointed in him as well. The main reason for that would be the fact that he apparently let the entire Man Utd fanbase down. However, the community has started to believe in another player who has stormed onto the scene.

Is Manchester United youngster Alejandro Garnacho the next big thing?

Alejandro Garnacho has broken onto the scene in the best way possible this year. Recently, he scored a 93rd-minute winner against Fulham to give United the win. It seems like he is truly making his way to be a starter for the team this season. In addition to that, Garnacho’s recent form has led fans to believe that they have found the next Mason Greenwood.

Manchester United really lost Mason Greenwood and got Alejandro Garnacho as a replacement.

A fan tweeted, “Manchester United really lost Mason Greenwood and got Alejandro Garnacho as a replacement. We’re are blessed.”

Garnacho has a higher ceiling than Greenwood did, it’s terrifying..

Garnacho was sent by God to United fans to ease us from the pain of losing Greenwood.

Where do United keep spawning these cracked youngsters from? Thought we could relax with Greenwood now gone but now they got Garnacho ffs

Even fans of United’s rival clubs have commented on the recent trend. They said, “Where do United keep spawning these cracked youngsters from? Thought we could relax with Greenwood now gone but now they got Garnacho ffs.”

We actually lost mason Greenwood and got Alejandro Garnacho.
Is God not wonderful. pic.twitter.com/KYMxn7511n

Garnacho is the incarnation of Greenwood. A new star on the rise ✨ pic.twitter.com/U0dkudoCMN

Mason Greenwood played as a center forward and a striker mainly. He had the ability to strike powerfully with both feet. Therefore, he immediately became a huge threat to opposition defenders. However, Garnacho is a different type of player. He is a pacey winger who isn’t afraid to take his opponents on. According to Transfermarkt, Garnacho has played 274 minutes for the Man Utd first team this season.

I will watch this sensational assist all night

His standout game came against Aston Villa in the EFL Cup, when he managed to put up 2 assists as United pulled it back to win the game eventually. If Garnacho keeps up this form he is in right now, he will be one of the best young players in the Premier League.

Maria Guardiola Boyfriend: Is a Relationship With Erling Haaland Possible?