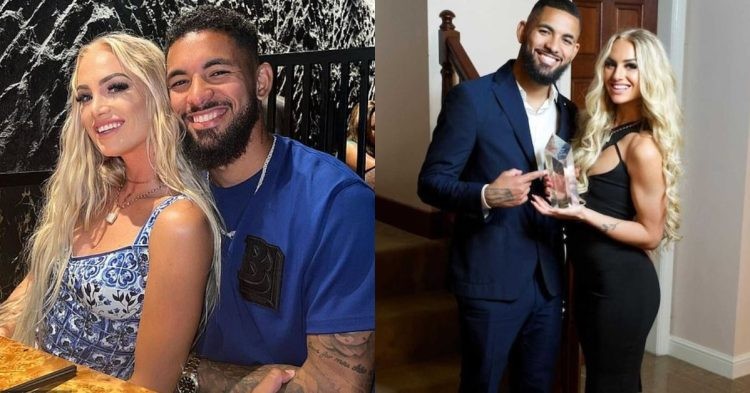 After almost a year of dating, Douglas Luiz and Alisha Lehmann of Aston Villa are said to have broken up.

The Villans couple had been dating since the beginning of the year, as they had previously revealed on social media.

After the Brazilian TV host posted a video that appeared to objectify Lehmann, Luiz criticized him last month.

Luiz was incensed by Milton Neves, a 71-year-old presenter after he tweeted a video of Lehmann jumping and celebrating a goal while facing the opposite direction.

Brazil-born Luiz, 24, has been a member of the Aston Villa team since 2019. On the day of the transfer deadline earlier this month, Arsenal made a £35 million offer for him.

He has had a rocky start to the season, mostly filling in the background for managers Steven Gerrard and now Unai Emery.

Why did Alisha Lehmann and Douglas Luiz break up?

The Sun reports that Brazilian star Luiz was allegedly not impressed by his partner’s decision to participate in the photo shoot. Eventually, which ultimately served as the breaking point for their marriage.

Their relationship, however, was short-lived, and they currently no longer work together. Lehmann, a WSL star, recently took part in a provocative calendar session that is reported to have strained their relationship.

To get your calendar 2023, link is in my bio ✨ pic.twitter.com/pQu8xFDJaX

A source elucidated, “Douglas was completely smitten with Alisha. When she first arrived, he was like, ‘Who is this girl?’ He quickly asked her out and they became a footballing power couple.”

Furthermore, the source added, “They were so loved up, But, sadly, as Alisha became more in demand off the pitch. The cracks started to appear in their relationship. When asked to do a calendar, she jumped at the chance to show off her sexy side but he was not happy.”

“He didn’t think it was something she should be doing. They rowed a lot and in the end Alisha simply had enough.”

The pair from Aston Villa, Douglas Luiz and Alisha Lehmann, have deleted all of their posts on instagram. This, however, might serve as evidence that the couple have seperated and decided to move on.

Just the previous week, Lehmann posted pictures from her upcoming calendar on social media. As she posed on a sofa, the Villa star wore an elegant, all-black bodysuit.

Ramona Bachmann is a Swiss soccer player who also plays for Chelsea. Ramona and Lehmann had a relationship in the past when they used to play for different teams in the WSL.

Even in 2019, they appeared together in a BBC Three programme where they discussed what it’s like to play for competing teams in the same league.

Luiz won’t play again until Villa’s match against Liverpool on Boxing Day. Lehmann, however, is scheduled to participate in a WSL match against Reading on Sunday.

While the Premier League is on hiatus owing to the World Cup, Luiz has returned to Brazil. Meanwhile, Lehmann is living with a teammate who will participate in the ongoing WSL.