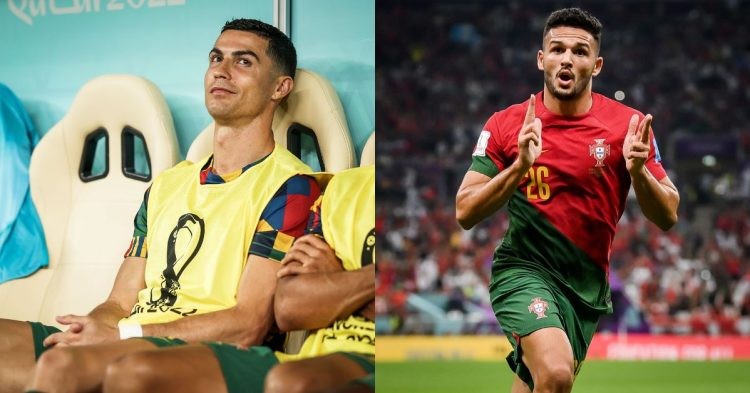 Cristiano Ronaldo and Portugal have done well so far in this World Cup. It looks like they are aiming to win the prestigious trophy in Qatar this year. That shouldn’t be surprising at all, especially considering they won the Euros in 2016. Ronaldo will be looking to lead his side to the World Cup trophy this year as well.

Portugal beat Ghana, and Uruguay in the group stages but fell to South Korea because of the last-minute winner from Hwang Hee-chan. Despite that, they made it to the knockout stages and are currently playing against Xherdan Shaqiri’s Switzerland.

Cristiano Ronaldo on the bench for a World Cup knockout game 🙄🤦‍♂️ pic.twitter.com/jE8vSC9bRU

As millions watch every World Cup game, Portugal’s games receive more spectators because of the 5x Ballon d’Or winner they have on the team. It looks like that hasn’t been the case today, as something else has the fans’ focus. Unfortunately for Ronaldo fans, the former Manchester United star isn’t playing against Switzerland tonight.

Why is Cristiano Ronaldo not playing against Switzerland?

Portugal manager Fernando Santos has decided that it will be a good decision to leave Ronaldo on the bench. The decision raised many eyebrows before the game, but it looks like fans are starting to back it right now. In the 17th minute, Goncalo Ramos scored the game’s opening goal for Portugal. He took the ball in style on his left foot and banged it with power onto the roof of the net.

Ramos did extremely well to add another to his tally for the night in the 51st minute. Manchester United right-back Diogo Dalot cut it back into the Swiss box to set up Goncalo for a tidy finish. If that wasn’t enough, he added a third of the night in the 67th minute to become the first player to score a hat-trick at the FIFA World Cup 2022.

Goncalo Ramos had the pressure of replacing Cristiano Ronaldo after only ever playing 33 minutes of international football.

It only took him 17 minutes to score for Portugal 🔥 pic.twitter.com/tRcwc6mRmc

Many have reacted to the goal, as fans now believe that Portugal is a better side without the former Real Madrid striker. A fan tweeted, “And that’s why Ronaldo is benched.” It looks like criticism of Ronaldo has started to take heat as the player who replaced Ronaldo on the starting lineup has scored a goal.

And that’s why Ronaldo is benched

No Ronaldo, no problem!! What a finish!!!

And that’s why Ronaldo was dropped. What a goal 🔥

This is why Ronaldo got benched for Ramos

Portugal are better without ronaldo

The common opinion among fans right now is that Portugal is a better team without Ronaldo. This is similar to the time when there were a group of Manchester United fans claiming that the team performed without Ronaldo. In addition to that, Ronaldo has never scored a goal in the World Cup knockout stages. It seems to be interesting for fans that Goncalo Ramos took just 17 minutes to do that.

At half-time, the score line was 2-0 for Portugal, after skipper Pepe scored a bullet header in the 33rd minute. Portugal seems to be playing some free-flowing soccer tonight, through Bernardo Silva, Joao Felix, and Bruno Fernandes dictating the plays.

Portugal ran riot against Murat Yakin’s men after Raphael Guerreiro scored the other goal in the 55th minute. It looks like Fernando Santos’ bold decision to leave Ronaldo might have worked in Portugal’s favor after all.