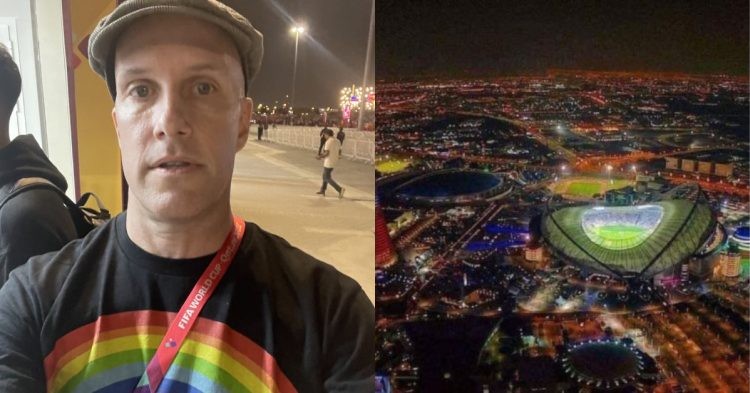 Grant Wahl, a well-known US soccer reporter, described his experience on Day 2 of the FIFA World Cup 2022.

The journalist arrived at the Al Rayyan Stadium in Doha sporting a shirt with a rainbow encircling a soccer ball.

Same-sex relationships are banned and will not be promoted in the country, as the officials illustrated earlier this week. Qatar has been pretty straightforward with this concept.

Just now: Security guard refusing to let me into the stadium for USA-Wales. “You have to change your shirt. It’s not allowed.” pic.twitter.com/TvSGThMYq8

Just yesterday the first match between Qatar and Ecuador unfolded with a grand opening ceremony. Ecuador easily defeated the hosts 2-0 as they take the top spot in Group A for now.

In a recent incident yesterday, a U.S. journalist, Grant Wahl, was barred from entering the stadium. He came to attend the match between the USA and Wales played at the Al Rayyan Stadium in Qatar.

Why was Grant Wahl detained?

In solidarity with the LGBTQ+ community, Wahl donned a black t-shirt with a circle in the colors of the rainbow encircling a soccer ball.

Wahl, while attending the USA’s opening match of the competition against Wales on Monday, was detained at the gates.

He said on Twitter that the Ahmed bin Ali Stadium in Al Rayyan first turned him away. He further disclosed that security personnel “forcibly took his phone from his hands” just after he sent his initial tweet.

I’m OK, but that was an unnecessary ordeal. Am in the media center, still wearing my shirt. Was detained for nearly half an hour. Go gays 🌈 https://t.co/S3INBoCz89

Wahl wrote on Twitter, “Just now: Security guard refusing to let me into the stadium for USA-Wales. “You have to change your shirt. It’s not allowed.”

Furthermore, he added, “ I’m OK, but that was an unnecessary ordeal. Am in the media center, still wearing my shirt. Was detained for nearly half an hour.”

A security guard said that his clothing was not allowed and therefore prohibited. Meanwhile, another guard refused to pick up the phone, which was thrown away.

Andrew Das, a New York Times reporter who happened to be walking by, was held as well. Das was ultimately discharged, but Wahl was asked if he was from the UK; in response, he said he was from New York.

Finally, a security commander showed up and apologized to Wahl before releasing him. A FIFA official, according to Wahl, also expressed regret.

What did Andrew Tate say about the situation?

Andrew Tate is a British-American kickboxer and extremely contentious influencer who was earlier barred from all social media sites for making controversial remarks earlier this year.

He embraced Islam earlier this year, and since then he has been a good disciple of the religion. The former kickboxer, who was born in Chicago and raised in Luton, once called Islam “the last true faith in the world.”

Tate has now verified himself as a follower of Islam after his photos of praying in a mosque went viral.

On his official account on Gettr, Tate said, “This is why I’m Muslim. Any Christian who believes in good and understands the true battle against evil must convert.”