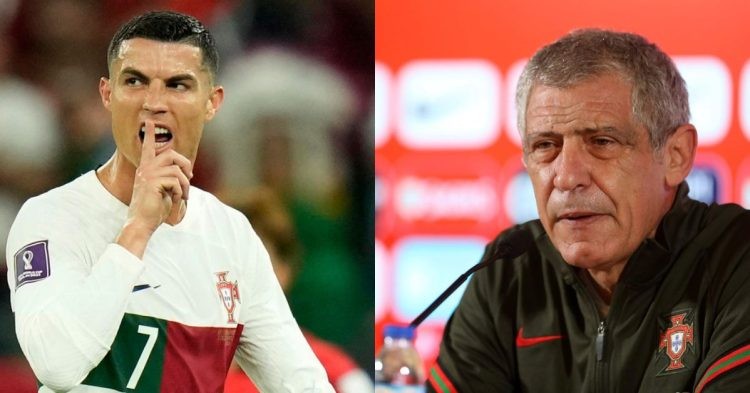 Cristiano Ronaldo and Portugal failed to beat South Korea in their last group-stage match. The Son Heung-min-led side came back from 1-0 down to win 2-1. Ronaldo failed to have an impact on the game and was substituted in the 65th minute for Andre Silva. While leaving the pitch, Ronaldo was pictured having an angry reaction which left Portuguese manager Fernando Santos unimpressed.

Cristiano Ronaldo was hauled off in the 65th minute against South Korea. While leaving the pitch, Ronaldo was seen ‘shushing’ a Korean player. He said, “Before my substitution, one of their players was telling me to leave quickly. I told him to shut up, he has no authority, and he doesn’t have to say anything.” Santos said he was not impressed by Ronaldo’s angry reaction.

“Have I seen the images? Yes, I didn’t like it. But from that moment onwards everything is finished regarding that issue. Full stop on this matter and now everyone is focused on tomorrow’s match,” Santos said. Ronaldo has scored just one goal, a penalty, this World Cup. His performances have not been as dominant as they once were for his national side. It looks like he is being overshadowed by Bruno Fernandes on form.

Santos even refused to confirm if Ronaldo would captain the Portuguese side for future games. While he has not directly disrespected the manager, as he did with Erik ten Hag, Ronaldo’s actions have not gone down well with Santos.

Another Piers Morgan interview is on the way. 😂 https://t.co/e8YDN1SbT4 pic.twitter.com/HM4PqFBY69

Lmao, I thought some people swore that Ten Hag was the problem, and this kinda thing cannot happen with Ronaldo at Portugal

Some fans even defended Ronaldo’s actions.

if it continues to happen who proves to be the common denominator?

I bet any money he is the captain

Ten hag was the problem ! It’s almost like Ronaldo’s is finding it hard to come to grips with the fact he’s finished at the top level 🤷🏼‍♂️

Ronaldo’s performances have dwindled considerably since last season. It was speculated this was because of a lack of game time with Erik ten Hag, which might still be the case. But having started all three games for Portugal so far, Ronaldo has hugely failed to impress. He will be under pressure to perform against Switzerland and help this heavily talented Portuguese side to mount a respectable World Cup challenge.