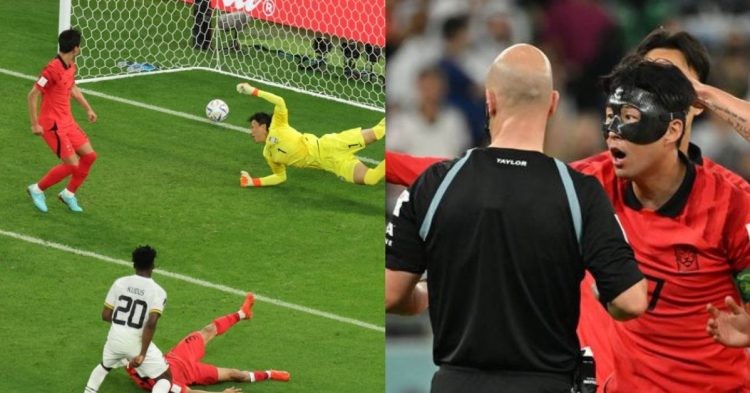 South Korea was left infuriated with referee Anthony Taylor after their 2-3 loss to Ghana in the FIFA World Cup 2022.  South Korea felt that the referee denied them a last minute corner which could have resulted in an equalizing goal for South Korea.

Although South Korea started the game well, Ghana’s Mohammed Salisu scored in the 24th minute against the run of play. Mohammed Kudus doubled the lead, scoring the second shortly after in the 34th minute. Cho Gue-sung scored a quick-fire brace in the second half to equalize the game for South Korea. The Asian giants looked dangerous on the break, putting Ghana on the back-foot. The Ajax winger and man-of-the-match Mohammed Kudus scored his second and Ghana’s third goal from Inaki William’s assist to win the game for Ghana.

As the game entered the final minute, match officials added ten minutes. Anthony Taylor blew his final whistle with 100.53 minutes on the clock, just when South Korea got a corner.

South Korean captain Song Heung-Min was furious at the Premier League based referee for not allowing to take the corner. The Tottenham winger argued with Anthony Taylor for a long time after the game, but to no avail. Paulo Bento, the Portuegese-born South Korean coach went straight to the referee after the final whistle. Cameras caught Bento screaming in Anthony Taylor’s face and was eventually shown a red card. This means that Bento has to sit out the final group stage game of South Korea against Portugal on Friday.

South Korean fans were left upset by Anthony Taylor’s decision to deny them a corner in the last few seconds. Fans took to social media to express their disappointment and anger after the game. Some fans said that “referee Anthony Taylor ruined the game.” Few fans even said that “South Korea were robbed of their victory.”

Here’s some more reactions and memes made by fans on Twitter:

Anthony Taylor showing the world why everyone hates English refs

What’s Next for Ghana and South Korea in the FIFA World Cup 2022?

After today’s loss, South Korea sits at the bottom of the Group F table. They have managed one point out of a possible six from their first two games. Ghana sits in the second position with one victory and one defeat from their two group stage games. The result of match between Portugal and Uruguay was crucial to determine the fate of Ghana and South Korea in this tournament. After Portugal’s 2-0 win over Uruguay, Portugal has qualified for the knock-out stages.