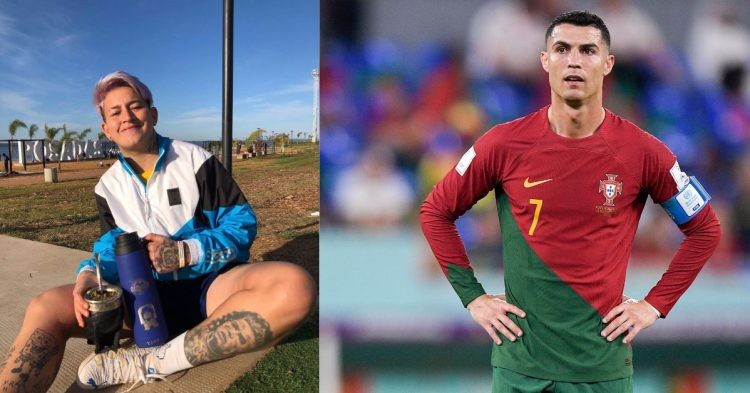 Lionel Messi, one of the greatest soccer players of all time, is a cult hero in Argentina. Ever since Messi led Argentina to World Cup glory, he has his native Argentines worshipping him like a hero.

For a place like Argentina, where people live and breathe soccer, it’s hard not to be a fan of Lionel Messi. However, Yamila Rodriguez has chosen a soccer player as her idol who is, to put it politely, not that popular in the country. That soccer player is none other than Messi’s arch-rival, Cristiano Ronaldo.

Argentina’s women team captain is having Cristiano Ronaldo tattoo on the leg. 🤭 pic.twitter.com/Uy7jf2xWHe

Yamila Rodriguez, who plays for the Argentine women’s soccer team, has publicly stated her love for Portuguese soccer legend Cristiano Ronaldo. Yamila’s love for Ronaldo is so much that she has got a tattoo of the former Real Madrid star on her leg. It’s uncommon for an Argentine to choose Ronaldo as her idol.

The 24-year-old forward even has Cristiano Ronaldo’s initials on the bio of her Instagram account. However, when asked about it, Yamila was firm in her answer.

Journalist (seeing her tattoo): “There is Cristiano Ronaldo… Messi, everyone…”

During an interview, a journalist asked Yamila about her CR7 tattoo. To which, she replied, “My idol is Cristiano Ronaldo.” The journalist, after seeing more than Ronaldo’s face on her leg, further questioned Yamila. He asked, “There’s Cristiano Ronaldo, Messi, everyone.” However, Yamila firmly replied, “Not Messi, Cristiano, and Diego (Maradona) always.”

Yamila’s disdain for Lionel Messi has fetched plenty of hilarious reactions on social media. Here are some reactions on Twitter.

As I was saying… pic.twitter.com/wTrbMJhr92

Its so sad even country fellows of Messi don’t rate him enough. 😭😭😭

While Yamila’s other idol, the late Diego Maradona, is hugely loved and respected by Argentine people, her disregard towards Messi, who is considered to be Maradona’s successor in Argentine soccer seems strange. Although everyone is entitled to his or her own free choice, it seems that Yamila has certainly earned the wrath of the supporters of Lionel Messi.

Yamila Rodriguez plays as a forward for Argentina’s women’s team and Boca Juniors. She is one of the star players of Argentina. Although Argentina lost in the semifinals, Yamila was the top scorer in the 2022 Copa America Femenina with six goals. Yamila also came close to winning the Copa Libertadores with her club Boca Juniors in 2022. However, her team lost 1-4 to Palmeiras, who won their first Copa Libertadores title.