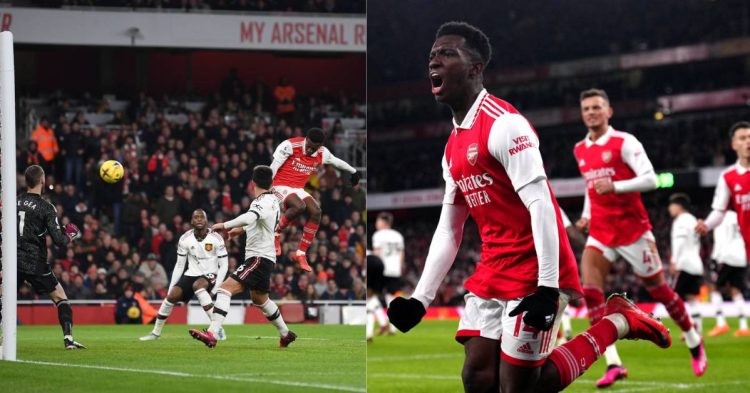 Arsenal vs Manchester United went head-to-head on Sunday, January 22, 2023, in one of the most anticipated encounters between the old rivals since the early 2000s. It certainly lived up to its hype at the Emirates Stadium in North London, however, it exceeded expectations in the USA as well. According to NBC, it was the most-watched Premier League match in US history.

Richard Deitsch, a writer for The Athletic, wrote in his tweet, “Soccer fans: NBC says Arsenal’s 3-2 win over Manchester United on Sunday is the most-watched Premier League match in U.S. history with 1.92 million viewers across NBC, Peacock and NBC Sports Digital platforms. Telemundo had 382,000 viewers.”

Arsenal claimed victory with a late winner to create a five-point gap between Manchester City and themselves. The Gunners also have a game-in-hand over the Cityzens.

In an action-packed match, United’s in-form star Marcus Rashford got the first goal after showcasing some great skills and shooting from 25 yards out. It left Arsenal’s goalkeeper Aaron Ramsdale stunned. United’s lead, however, lasted only for six minutes. Eddie Nketiah was left unmarked by Aaron Wan-Bissaka and headed Arsenal back level from Granit Xhaka’s cross. The teams went into the break with a scoreline of 1-1.

In the second half, there were more goals on the way for both teams. Gunner’s winger Bukayo Saka drove in from the left wing and scored a magnificent long-range goal. His finish was low and into the far corner. United keeper David de Gea could not do much to stop it.

Again, the lead lasted for just six minutes, this time it was United who responded. Defender Lisandro Martinez took advantage of a fumble from Ramsdale and scored with a looping header. He justified the warrior status United fans give him by going for a risky header with a head injury.

Arsenal started to take complete control of the game after United equalized. Saka almost scored again and restored Arsenal’s lead with a carbon copy of his first goal. This time, however, the ball hit the post. Late in the game, when De Gea pulled off a brilliant point-blank save from Nketiah, the hosts looked like they would have to settle for a point.

United fall to a narrow defeat in north London.#MUFC || #ARSMUN

Nketiah had other plans. He found himself on the end of a pass from midfielder Martin Odegaard and scored to give Arsenal the win. Arsenal has notched up 50 points in 19 games and leads the table. Meanwhile, United has 39 points from 20 games and is in the fourth spot.