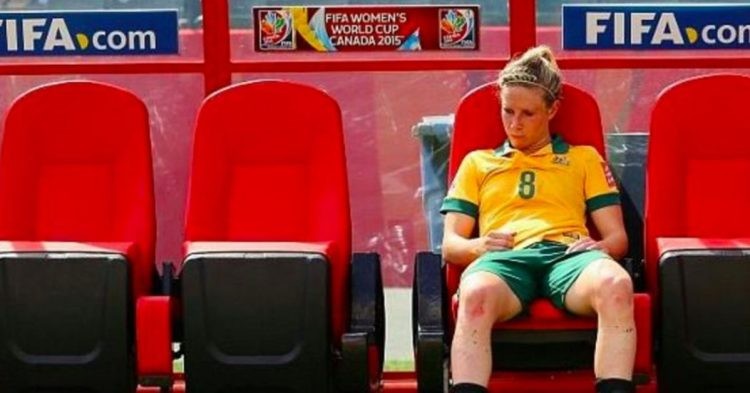 In a series of events that have unfolded in the past, which may be termed as catastrophic, one such incident which has always been highlighted is the thrashing defeat of the Matildas. The Australian women’s national soccer team was thrashed 7-0 by the Under-15 boys of Newcastle Jets in a practice match before Rio Olympics.

In a massive setback before the Rio Olympics in 2016, the Australian women’s soccer team lost 7-0 to Newcastle Jets’ Under-15 side.

The Matildas were ranked fifth in the FIFA World Cup rankings and had reached the last three-quarters finals of the World Cup. However, the Australian Women’s team was humiliated on the pitch with a horrendous 7-0 defeat in a practice match.

https://t.co/gkYQPRLFuH Australia's national women's soccer team have suffered a devastating defeat in the lead up to the Rio Olympics – going down 7-0 to the Newcastle Jets under-15 boys side.
We divide them because men would dominate everything.

The Matildas suffered a huge setback to their confidence and preparations before the Rio Olympics in 2016. They were humbled by the bunch of school kids. They did rest a couple of players but came in with a strong line-up and started with their AFC player of the year, Katrina Gorry.

Australian National Women’s vs U-15 highlights

As the Matildas started to prepare for the Rio Olympics, they were the favorites to win the gold medal that year. As preparations started, they played a friendly match at Valentine Sports Park against Newcastle Jets U-15 boys’ side.

However, the favorites to win the gold medal that year became the laughingstock of the whole world. They suffered a humbling defeat by a bunch of school lads in a practice match.

The Matildas just couldn’t keep up with the boys. They were toyed with and thrashed in every part of the field. The score line suggests the outcome, as the Australian team couldn’t score a single goal and conceded seven.

How did the world react?

Australian football fans were massively upset by this result. They reacted negatively on social media, elucidating how poor the standard of Australian women’s football has become.

Gary Van Egmond, the Matildas’ assistant coach and the academy director of the Newcastle Jets, was shocked by this result.

In an interview, he said, “To be honest, we didn’t expect that. But the Jets boys were very good. All credit to them. They moved the ball around very well and were excellent on the night. “

Furthermore, he added, “I think there were a couple of contributing factors to the loss. At this stage in their preparation, obviously, the Matildas are not in a position to play regular games, so I’d suggest all and sundry were a little bit rusty. We could have had an easier game, but we definitely want to keep testing the girls. The Matildas will be the sole football representative for Australia at the Olympics.”

“Australia's national women's soccer team have suffered a devastating defeat in the lead up to the Rio Olympics- going down 7-0 to the Newcastle Jets under-15 boys side.”

Furthermore, he added, “There were many, many good elements to last night’s game, which certainly showed players who can step up to that level. For me, the most phenomenal part was Ellie Carpenter, who’s a 16-year-old girl and played in midfield in the second half against boys her own age, 16-year-old boys who are at the peak of their game playing for the Jets, and she could compete, which was phenomenal.”

As we all know, worldwide, men’s soccer is more famous and interesting than women’s soccer. Overall, as we know, the Men’s World Cup has the highest viewership.

Also, not many countries in the world supported women’s playing soccer till now. Most countries fail to field a complete women’s national team.

Meanwhile, if we look deeply at the numbers, they are a bit skewed. The availability and opportunities for women’s soccer have always been less compared to those for men.

The games are not properly televised or streamed, which results in a cut down on viewership. The tournaments do not have proper broadcasters, and the companies are not interested in them at all.

How is women’s soccer different from men’s?

As the rules suggest, no matter what the gender is, they have to follow the same laws and rules of football. All the rules of the game apply to both genders. The ball size is the same, the length of the field is the same, the duration of the match is the same, and all the other rules are also the same.

Then you must be thinking, what’s the major difference between men’s and women’s soccer? The first major difference is the style of play. The men tend to be more physical and more aggressive. They tend to have more technical skills and more pacing strategies. Meanwhile, when compared to women, these factors tend to be the biggest reason for the difference in the sport.

The second major difference is the pay. As we all know, there have been numerous rumors about equal pay for men and women in sports. However, this is far, far away from happening. Let’s take a look at the comparison between the salaries in the top leagues in the US; the average salary in the top women’s soccer league, NWSL; and the highest men’s soccer league, MLS.

Finally, to conclude, we can say that, at their core, men’s and women’s soccer are incredibly similar. We can also say that the game is, fundamentally, the same for both types of teams.