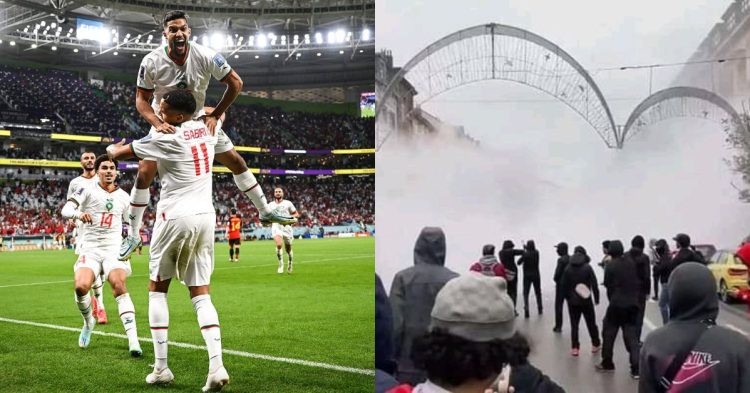 Soccer is one of the most passionate sports in the world. Not just that, the World Cup adds to that as well. The pressure and atmosphere on FIFA‘s biggest stage are on a different level. The entire world witnessed this recently when a country’s win at the World Cup sparked a huge riot.

Recently, Morocco won their game 2-0 against Belgium. It has been one of the biggest shocks of the tournament so far, which includes Saudi Arabia’s win over Argentina, and Germany‘s loss to Japan as well.

What happened in Belgium after Morocco beat them in the World Cup?

The game between Belgium and Morocco was quite evenly biased. That was up until the African country found its momentum during the match. Roman Saiss bagged the opening for his country in the 73rd minute before Zakaria Aboukhal put the game to sleep in the 92nd minute.

Belgium were disappointed to lose their first World Cup group-stage game since 1994. However, it seems like there was another issue for soccer fans to worry about. In Brussels, fans took over the city and started huge riots, which have been the talk of the town for the last few hours.

Morocco’s victory was a major upset at the World Cup and was enthusiastically celebrated by fans with Moroccan immigrant roots in many Belgian cities. pic.twitter.com/bKGBBi8uYl

The people in the city burned cars, destroying things and bikes on the road among many other things. It seems like Belgium’s loss to Morocco was not received well by the fans. In addition to this, many fought on the road as well, and the Brussels city center had to be closed down, and police arrived at the scene to calm the situation down.

Disturbing scenes out of Belgium where riots have broken out after the country’s 2-0 loss to Morocco today. Police have reportedly had to seal off parts of Brussels’ city centerpic.twitter.com/1Sz6qOa0Zh

According to Reuters, a spokesman for the department, Ilse Van de Keere, mentioned that the police calmed things down. This happened at around 7 pm local time. And the police stayed in the area to make sure the riots did not continue after they were gone. It is no secret that soccer fans are passionate, but riots over a loss might be something gone too far, especially since it could have seriously hurt people.