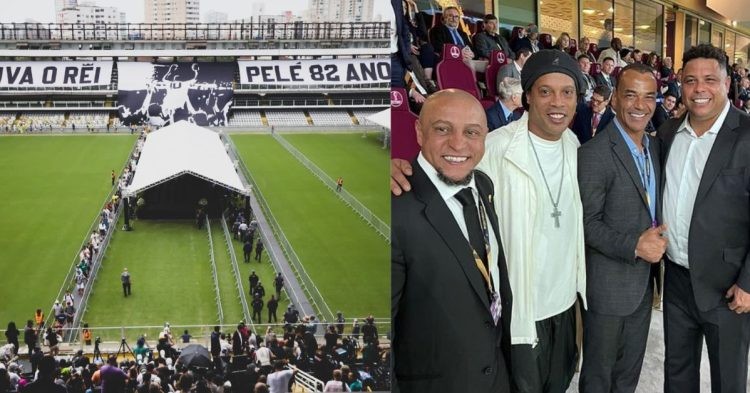 On 29 December 2022, beloved soccer legend Pele passed away. It was an event of utmost sadness for the entire soccer community across the globe. It didn’t matter whether a soccer fan was old or young. Everyone was aware of Pele just as much as Lionel Messi or Cristiano Ronaldo.

As the world, and Brazil, in particular, mourned for the legend, it was unfortunate to witness the absence of Brazilian soccer legends at O Rei’s funeral.

Pele was the only player to have three FIFA World Cups to his name. The 82-year-old Brazilian passed as a result of losing his battle with cancer. He had been diagnosed with bowel cancer in 2021 and had begun his treatment. Thereafter, in November 2022, he was admitted to Sao Paolo’s Albert Einstein Israelite Hospital to receive palliative care.

After a month or so, right on the cusp of entering the new year, the 82-year-old passed. Pele’s own country loved him and will continue to love him. Such was Pele’s fame in his nation that former Brazilian president Fernando Henrique Cardoso, appointed him as the Minister of Sports for Brazil in 1995. After Pele’s death, Brazil announced a 3-day mourning period for the former Santos star.

It’s almost hard to imagine that Brazilian soccer legends would miss the funeral of their country’s premier soccer legend.

Who were the notable absentees at Pele’s funeral?

O Rei’s funeral was reportedly attended by only a handful of active and retired soccer players outside the Santos region. Most notably, however, it has been reported that no player from Brazil’s infamous 2002 World Cup-winning team attended Pele’s funeral.

One of the best fullback pairs of all time Roberto Carlos and Cafu were both absent from the funeral. Roberto Carlos was a legendary, goal-scoring left-back, playing for massive European clubs in Real Madrid and Inter-Milan. Cafu, the world-renowned right-back, on the other hand, is an Italian Serie A legend, having made his name at sides like Roma and AC Milan.

Kaká, the best playmaker of his time, was also absent from O Rei’s funeral. The attacking midfielder rose to fame during his time at AC Milan. He would eventually go on to shine for Real Madrid following his 2009 move to the Santiago Bernabéu.

Perhaps the biggest name on this list of famous absentees was Ronaldo Nazario. Ronaldo is still considered one of the best number nines to ever feature on a soccer pitch. He played for Barcelona, Inter Milan, AC Milan, and Real Madrid during the height of his career. The two-time Ballon d’Or winner, who is also the owner of Spanish Club Real Valladolid and Brazilian Club Cruzeiro, was also absent.

Thousands have gathered at Santos’ stadium, Estádio Urbano Caldeira, to pay respect to O Rei himself, Pelé, on the first day of his funeral. 😢🇧🇷 pic.twitter.com/rgRCUibmqP

All of the above-mentioned soccer legends were present at the Qatar World Cup. However, for reasons known only to them, didn’t make it to Pele’s funeral. Santos Football Club’s home ground, the Vila Belmiro Stadium, held Pele’s funeral.