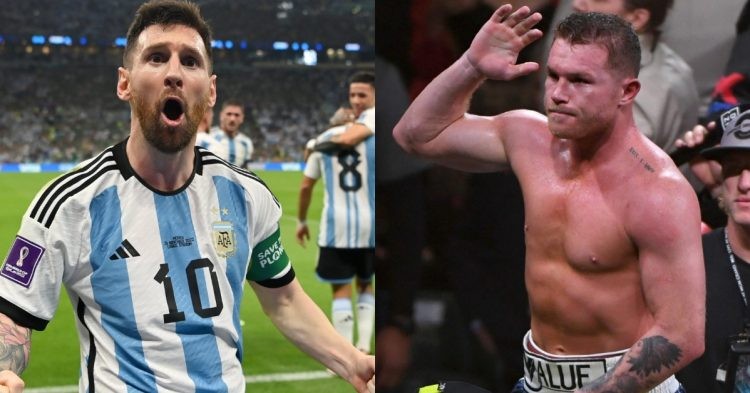 It looks like cooler heads have prevailed as Canelo Alvarez issues a sincere apology to Lionel Messi.

So, why is one of the best boxers in the world apologizing to one of the best soccer players in the world? It all started on November 26th, when Argentina took on Mexico in the Group C match of the FIFA World Cup 2022. After the match, footage went viral of Messi apparently kicking a Mexican national team jersey on the floor.

As soon as Canelo came across the footage, he went off on Lionel Messi on Twitter. He called out Messi for his act and even threatened to put his hands on him if they ever were to meet in person. However, the entire soccer world rushed to Messi’s aid. From Sergio Aguero to Cesc Fabregas, famous soccer stars all over the world explained why the jersey was on the floor.

After the players are done running around for 90 minutes on the pitch, their jerseys are all sorts of dirty. Hence, they put their jerseys on the ground, and the staff later do the laundry. It is a valid explanation why all the jerseys were on the floor, along with the Mexican national team one. It looks like Alvarez has been receptive to the explanations and has decided to take back his words.

“These last few days I got carried away by the passion and love I feel for my country and made comments that were out of place for which I want to apologize to Messi and the people of Argentina. Every day we learn something new and this time it was my turn.”

Lionel Messi did not react to the threat from Canelo Alvarez. He also did not issue any statement on the matter as a whole. Instead, the soccer world did all the talking on his behalf. There was footage of Messi moving the jersey with his feet during the post-match celebrations. However, the footage seems to be out of context as all the other jerseys were on the ground as well.

So, neither Messi nor any other Argentine player meant any kind of disrespect to Mexico. Hence, Canelo Alvarez’s apology to Messi does make a lot of sense. As Canelo explained in his apology, he was naive to jump to the conclusion so soon and realizes his mistake. However, fans have other theories. Some are adding that Canelo backed down too easily, while others think his loss to Dmitry Bivol may be affecting his psyche.

Here are some fan reactions to the incident

Canelo is an embarrassment to Mexico backing down here. He will never be like Ali or Fury or Mayweather and stand up for his beliefs. He’s a coward.

The man has embarrassed himself

I think he’s going through a difficult period. That loss to Bivol has likely had a huge psychological impact on him

Messi won without acknowledging him. Not even one word LMAO

Chalk this up as ANOTHER LOSS for Canelo!!!

It is very unlikely that Canelo Alvarez is scared of Messi’s power. Alvarez is a world-champion boxer and does not have any reason for fear. He also stated that he will keep supporting Mexico in the ongoing World Cup, as he backed them to reach the final!