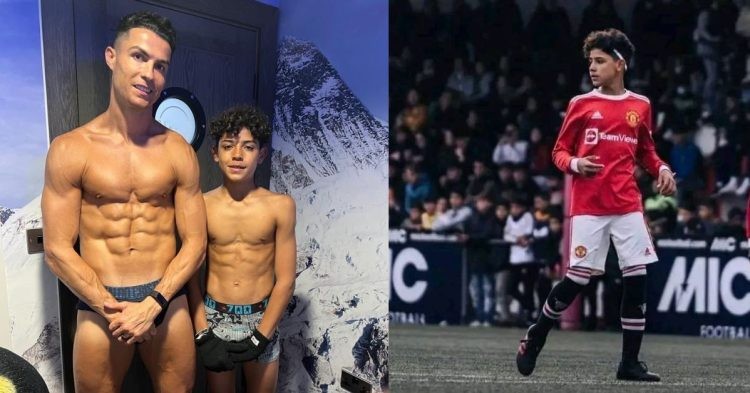 Cristiano Ronaldo is concerned about his child becoming addicted to new technology. As a result, he has not given his 12-year-old son a mobile phone. He fears he doesn’t get “obsessed with technology.”

The Portuguese striker revealed he fears his son, Cristiano Jr., will get addicted if he has a phone, like many children of his age.

Cristiano Ronaldo and his son Cristianinho

Cristiano Jr. was born in San Diego in 2010. He is nicknamed ‘Cristianinho’ which stands for ‘little Cristiano.’ Cristiano Jr. is already living up to that billing. The Junior has joined the Manchester United Academy and has been in scintillating form bagging lots of goals.

As we all know, the identity of Cristiano Jr’s mother is still unknown to him and rest of the world as well. Cristiano said he will never reveal it to the public. However, he did say that he would tell his son Cristiano Jr. when he feels he is old enough to know the truth.

Cristiano Ronaldo has revealed he wants his son Cristiano Jr. to follow his footsteps. He wants him to become a professional footballer like him. The 12-year-old has already shown he has the skills and talent to be one of the best in the future. Cristiano elucidated he will not force his son into it, it’ll be his decision. But the Manchester United star has said he “would like it” to happen.

Ronaldo gives his verdict on the current generation & technology

Ronaldo does see the advantages of modern technology but is wary of obsessions. As a result, he has continually rejected his son’s request for a Mobile Phone.

When asked about whether technology had helped him become a football star, he said, “Definitely it helps a lot.”

It helped me and the people here, all the world. I think we have to take advantage of that but we shouldn’t be obsessed with it.

Further Ronaldo said, “I know as well that this young generation are one step ahead of their age so I agree that we have to take advantage of that but not to be obsessed about technology.”

Give them but with a period of time, not give them all the time. I think that’s the main point here.”

Cristiano Jr., who turned 12 this June, is the eldest of Ronaldo’s four children. The Manchester United talisman revealed he had refused the youngster’s request for a phone four years ago.

Legacy to be continued ⭐🇵🇹 pic.twitter.com/o5IgYs2atx

“I ask him to wait for the future. One day, Junior asked me for an iPhone to call me but I told him no. If he wants to call me he should through his grandmother.”

“I want to transmit to my son the idea that it’s not easy getting anything he wants. Education is the best thing I could give him.”

Cristiano Jr. is said to have been born to an anonymous surrogate mother before his footballer dad met current partner Georgina.