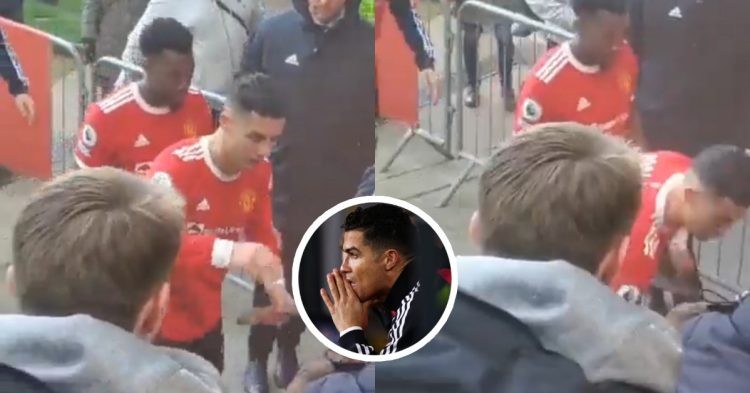 Even professional athletes like Cristiano Ronaldo struggle to control their emotions after a defeat. Manchester United lost 1-0 to Everton on April 9th at Goodison Park. On the same day, a video of Ronaldo smashing a 14-year-old boy’s smartphone as he headed to the dressing room after full-time, went viral.

Cristiano Ronaldo has been charged with a breach of FA Rule E3 for incident after final whistle at #MUFC v #EFC game at Goodison on April 9. Alleged forward’s conduct was improper and/or violent. United: “We will be supporting the player in his response to the charge.”

An inquiry was launched by Merseyside police after the clip was shared online. Ronaldo was questioned by police about an allegation of assault and criminal damage, the police revealed.

What punishment will Cristiano Ronaldo face?

According to sources, Ten Hag’s response at his pre-game press conference was due to a language barrier and a misreading of the question.

Ronaldo has accepted his FA charge after Ten Hag initially said ‘he will not accept it’. Ten Hag’s response is believed to be in relation to a possible multiple-match charge for Ronaldo #mufc https://t.co/VAJ2b7WaB6

FA determines to look into the situation, as Ronaldo was accused of violating FA regulation E3 after it was claimed that the forward’s conduct after the final whistle was improper. Reports claim that United said they “would be backing the player” in a statement following the Ronaldo accusation.

United thinks it would be harsh for the FA to ban Ronaldo for a number of games in connection with the allegation. United is now awaiting the results of the hearing, which FA sources indicated will take place regardless of Ronaldo’s response.

Ronaldo regrets outburst as he apologizes to Manchester United supporters

Ronaldo has accepted his charges and had apologized earlier for his outrage on the field. On his social media, he claims “It’s never easy to deal with emotions in difficult moments. Nevertheless, we always have to be respectful, and patient and set the example for all the youngsters who love the beautiful game.” He also invited the supporter to his next game at Old Trafford as a sign of fair play and sportsmanship.

Some fans criticize FA for delaying the process as the incident took place in April and has not been resolved completely. They claim FA is a “hopeless” organization and is a complete joke for its administration. After coming in for the injured Anthony Martial in the first half, Ronaldo made his way back to Goodison Park and scored his 700th club goal in a 2-1 victory over Everton in the Premier League.