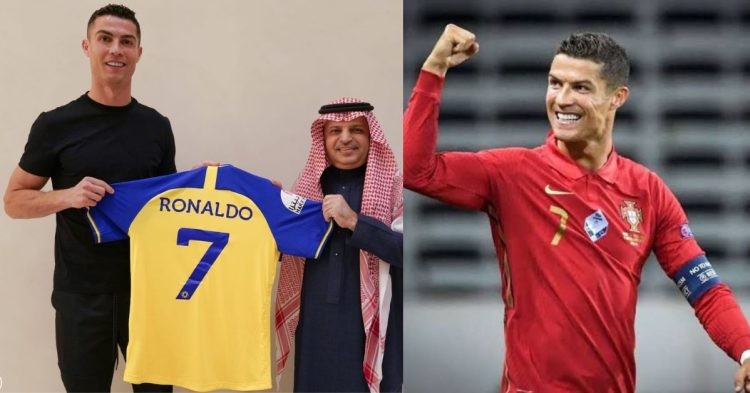 Cristiano Ronaldo has finally ended all speculations about his next club and joined the Saudi Arabian outfit Al-Nassr. The 37-year-old Portuguese’s contract with the Saudi club is set to break some records.

Cristiano Ronaldo has had a season to forget so far. His feud with his former club Manchester United and Erik ten Hag ended his fairytale homecoming in a disaster. The Portuguese decided to sit for an interview with Piers Morgan and absolutely bashed the club authority and the head coach. United terminated his contract and probably this is what he wanted as well.

The great Portuguese striker went on to the World Cup as a free agent. Again, he had a tournament to forget, scoring only one penalty. A well-stacked Portugal went out of the quarter-finals, against Morocco, rather shockingly. The talks were going on about his move to certain clubs but the clubs seemed very reluctant to take such a financial and philosophical risk.

Clubs like Bayern Munich, Chelsea, and even Newcastle United were not ready to take a risk with the Portuguese. However, one club seemed very much interested in Cristiano, even before his move to Manchester United. Saudi club Al-Nassr offered a massive $300 million offer on the table for Cristiano. Although, his willingness to play at the highest level made him snub the record-breaking contract for his boyhood club.

▫️ Agreement valid for two years and half;

▫️ Total salary will be close to €200m per year, but this includes commercial deal.

It’s the biggest salary ever in football. pic.twitter.com/ZnOg8lY6Wb

Al-Nassr came alive in the Cristiano transfer saga again; this time, Cristiano seemed interested. Cristiano Ronaldo, even at 37 is the most commercial face in the entire sport by a huge margin. He is the most followed person on Instagram with 526 million followers. Al-Nassr was ready to capitalize on Cristiano’s worldwide popularity and offered him a $500 million deal for two and a half seasons.

Cristiano’s salary breakdown is stacked with absolute mad numbers. His contract in the Saudi club will see him earn a whopping $200 million a year. The Portuguese will earn an eyewatering $16.6 million a month and $548 thousand a day. If we break it even more finely his hourly earnings will be around $22,833, $380 in a minute, and $6.34 in a second.

Who is the highest-paid soccer player in 2023?

Soccer contracts these days produce crazy numbers and the New Year will see the numbers go crazy high as well. The highest-paid soccer players in the sport will be the names we might expect there to be.

However, Ronaldo’s new contract at Al-Nassr made the contracts of the PSG stars look very small. The Portuguese will be head and shoulders above anyone in terms of earnings in 2023. He will earn almost double of what the PSG stars earn combined with $16.6 million a month. It will be next to impossible to see anyone earn more than the Portuguese five-time Champions League winner.