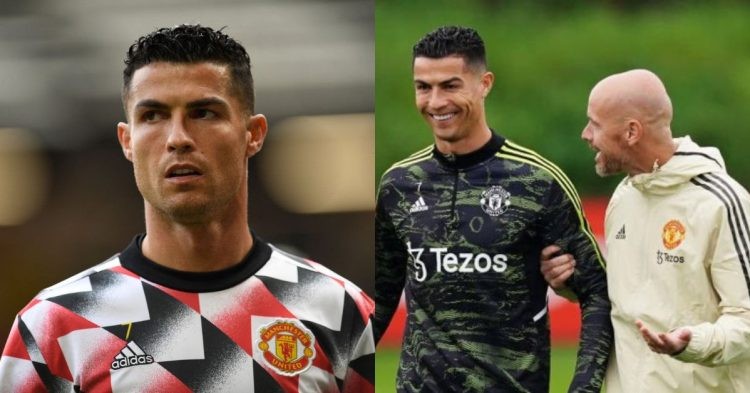 Cristiano Ronaldo has been categorized as one of the best football players in the world. His professional schedule and dedication to the sport have always been his strong suit.

But recently, Ronaldo’s attitude and his egoistic behavior towards the club have made the headlines. Twice he went storming down the tunnel before the final whistle of the game.

Erik Ten Hag punished Ronaldo by leaving him out of the squad to face their London rivals, Chelsea. He wasn’t part of the team that drew 1-1 at home, courtesy of a late Casemiro equalizer in stoppage time.

Cristiano Ronaldo and his professional game are somewhere lost in the midst of this season. His negative attitude and egocentric behavior have been a major hindrance to Manchester United’s growth prospects this season.

Cristiano Ronaldo is BACK in Manchester United training today 💥 pic.twitter.com/ZjKKJY8rY9

Cristiano Ronaldo’s main contribution to the team this year has been negative and abysmal in nature. Leaving the game before the final whistle, refusing to come on as a sub when his manager needs him, and many more.

Alan Shearer commented, “In a team game, where the basic principle is that you’re all in it together, win or lose, such a display of selfishness and petulance is desperately unprofessional and it’s right that Ronaldo should be disciplined by Manchester United because of it.”

A fan said in a post, “You heard about a thing called moving on, bro? Let’s not bring back toxicity for the likes of man. It’s been resolved we don’t need this. “

A second said, “I wonder what these Ronaldo defenders would say if he did to Sir Alex. He’s paid a fortune to play football. And players that play for United should be HONOURED to play for us, not snub the managers. “

So this is basically how the Ronaldo & Ten Hag situation unfolded then? pic.twitter.com/OKmNw1GrGq

Another one added, “The video, on second look, spells disrespect across every letter from the one who was rightfully punished for his actions.”

The last one concluded, “Ronaldo shows his real egocentric face after he’s finally confronted with a proper manager.”

After being punished for his horrendous behavior towards the club and his manager, Cristiano Ronaldo is back in training with Manchester United.

Ronaldo was fined two weeks’ wages and wasn’t included in the squad to face Chelsea on the weekend. But, after some showdown talks with Manchester United boss Erik Ten Hag, the Portuguese striker is back in training.

Cristiano Ronaldo is back with Man United first team. He has returned to training with the 1st squad today in preparation for Thursday’s game against Sheriff. 🚨🇵🇹 #MUFC

Erik ten Hag and Ronaldo have been in constant dialogue — Cristiano’s now in contention for next game. pic.twitter.com/Wmgp2lFTqk

There had been some speculation that Ronaldo’s fate was in the hands of Ten Hag. He had the full power to make the decision whether to include Cristiano Ronaldo back in the squad or not.

Ten Hag backed Ronaldo and elucidated that he is an important part of the team, and he is counting on the striker whenever he needs him. He also thinks Ronaldo will stay at United after the January transfer window.