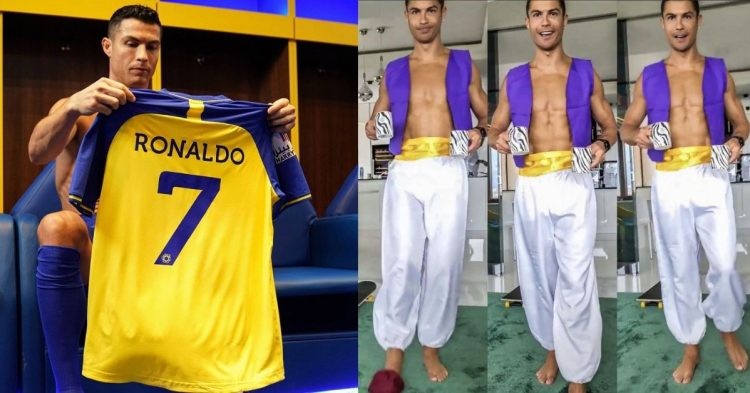 Recently, football superstar Cristiano Ronaldo has made headlines by joining Al-Nassr, a Saudi Arabian football team. But that’s not the only thing that’s got people talking. After joining Al-Nassr, for a contract of $200m, a photo of Ronaldo from 2020 has resurfaced on social media, where he can be seen dressed as Disney’s Aladdin.

This photo of Ronaldo has made a lot of people laugh, as well as some people who are disappointed in him for joining a team in Saudi Arabia. Many people have shared the photo on social media, with comments and jokes about Ronaldo’s new career move.

In 2020, to celebrate the second birthday of his twins Mateo and Eva, Cristiano Ronaldo dressed up in that costume. Georgina Rodriguez had also joined in, dressing up as the pink Power Ranger. Mateo wore a Spiderman costume, Cristiano Jr dressed up as the Hulk, and Eva and Alana were princesses.

In November, Ronaldo signed a two-and-a-half-year deal with Al-Nassr, which was reported to be worth over $200 million. On Tuesday, he was welcomed to Al-Nassr’s home ground Mrsool Park by an enormous crowd of yellow and blue, with thousands of fans attending to witness his introduction. After making a statement at the press conference, he went to the locker room to greet his new teammates.
He was wearing the team’s colors when he stepped onto the field, and his name was chanted as he autographed and threw soccer balls into the stands. His family then accompanied him on the pitch, which had a capacity of up to 25,000 people.

Cristiano Ronaldo’s shock move to Al-Nassr in Saudi Arabia has been met with disappointment from fans across the world. The transfer has also been met with surprise due to the fact that Al-Nassr is not one of the biggest teams in the world and playing in the Saudi league is not seen as being as competitive as in Europe.

The wages that Ronaldo will get in his new team are very high, but the level of soccer he will be playing will be significantly lower than he had been used to in the past.

@Cristiano
It’s not too late
plz terminate that contract and keep your legacy
I don’t know why you lost your ambition and motivation to fight until the end in Europe
But as a lifelong football fan, it is hard to see you are even in there
Plz come back strong
This was you btw…. pic.twitter.com/wkEct1tTzj

He finally left football to become a social media influencer

In spite of the disappointment from fans, Ronaldo is excited about his new challenge. He has made it clear that he still has the ambition to win more trophies and be successful in the Saudi league. It remains to be seen whether the Portuguese legend will be able to make the same impact in Saudi Arabia as he did in Real Madrid, Juventus, and Manchester United.